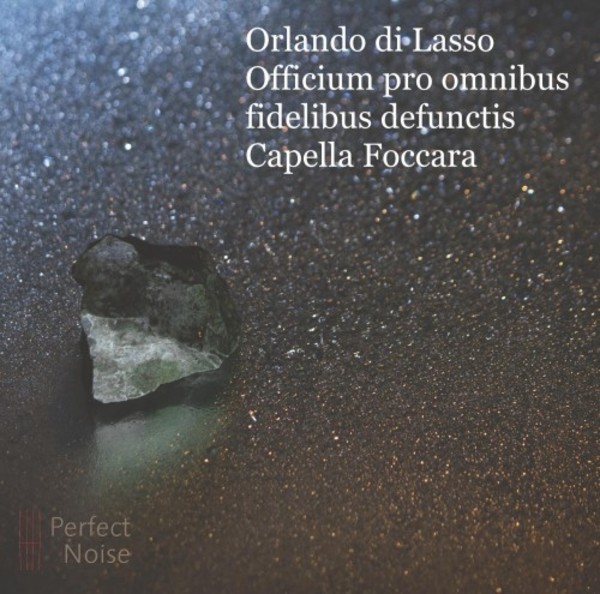 In the manuscript Tonk. Schl. 23, a large choirbook from the former Benedictine abbey of St Ulrich und St Afra in Augsburg which is currently housed at the Augsburger Staats- und Stadtbibliothek, musicologist Dr Tobias Rimek discovered a previously unknown copy of Orlando di Lasso's Requiem for four voices. The version found in the Augsburg choirbook is not only the oldest, but most certainly the original version of the Requiem, including a setting of the sequence 'Dies irae', which is missing in all of the later transmissions. The original version from Augsburg is a perfect fifth lower than later printed editions of the composition, which puts all four voices of the ensemble into an extremely low register, requiring the following vocal ranges: tenor, baritone, bass und basso profondo. In our rendition (in the edition by Tobias Rimek) the voices are reinforced with instruments playing colla parte, consistent with performance practice of the period: three sackbuts, bass dulcian and organ magnify the solemn gravity of the composition. The ensemble Capella Foccara, made up of internationally renowned musicians devoted to historically informed performance practice, focuses on lesser-known music from the 16th to the 18th century, performing primarily works from the regions of Bavaria and Swabia, and from the imperial center of Augsburg.

The point of departure for this CD was a convention of the Association for Augsburg Diocesan History, the occasion being the five-hundredth anniversary of the birth of Prince-Bishop Cardinal Otto Truchsess von Waldburg in the preceding year. In order to add an appropriate air of splendour to this commemoration of such an illustrious personality, we reinforced Orlando di Lasso's Requiem, originally for four voices, with three sackbuts, bass dulcian and organ. In this magnificent constellation the Augsburg version of the Requiem was recreated on 21 November 2014.