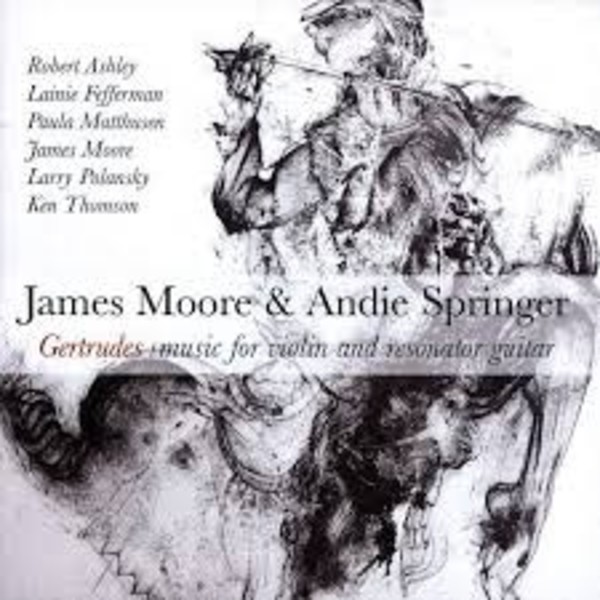 For Andie Springer Showing the Form of a Melody

For Andie Springer Showing the Form of a Melody

Longtime friends and collaborators James Moore and Andie Springer began performing as a duo in 2011 while on tour with playwright Richard Maxwell's Neutral Hero. This anthology comprises compositions by their friends and colleagues, all written or adapted for the duo and their unconventional instrumentation of violin and steel-string resonator guitar.

Larry Polansky's 10 Strings (9 Events) (2011) is part of a set of works that explores his idea of morphing, a kind of procedure in which a "source" musical element is gradually transformed into its "target" through a series of intermediate iterations. Paula Matthusen's in absentia (2008) features an electronic accompaniment that gradually becomes more harmonically complex. Over the still harmonic canvas, only marginally disrupted by the beating tones from a pair of closely-tuned crystal glasses, guitar and violin weave a filigree of sustained tones, fragmented melodies, and feeble harmonics. The title of this album, Gertrudes, alludes to Gertrude Stein, author of the three poems that served as an inspiration and title to James Moore's compositions (Suspicions, Look Like, A Wish [2014-2015]) included therein. These pieces, each a single page in length, function as springboards for improvisation, the notation oscillating between being fully specified and merely indicative of gesture and contour.

The title of Ken Thomson's Deafening Irrelevance (2011) alludes to his concept of the piece as a sort of primal scream, a guttural expression of his frustrations with the loudness and short-sightedness of the contemporary world. Lainie Fefferman's Fiddly Tune (2012) begins with an improvisation that gradually coalesces into a theme from an imaginary tradition, its Dorian color evocative of Celtic idioms. Two-against-three polyrhythms (both between and within the instrumental parts) explode the surface simplicity into kaleidoscopic metrical patterns; the same concept translates to timbre and texture in the final section, when the players double their parts by vocalizing a monosyllabic chant.

Robert Ashley's For Andie Springer Showing the Form of a Melody, "Standing in the Shadows," by Robert Ashley (2010) opens with a rhythmic recitation of the entire title, a device that brings to mind Ashley's long-standing interest in the intrinsic musical qualities of everyday speech. Subsequently, the piece unfolds as eight sections, each sixteen bars in length, gradually sounding out a lilting melody in 3/4, accompanied in this recording by a bowed ostinato downbeat on guitar.