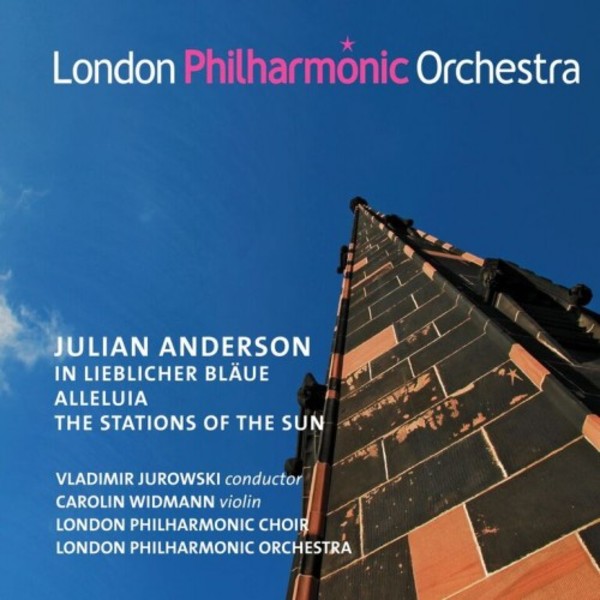 Julian Anderson - In lieblicher Blaue, Alleluia, The Stations of the Sun

Alleluia
In lieblicher Blaue
The Stations of the Sun

Alleluia
In lieblicher Blaue
The Stations of the Sun

This recording features one of todays most sought-after conductors, Vladimir Jurowski, who was appointed Principal Conductor of the London Philharmonic Orchestra in 2007, with many of his recordings on the LPO Label being chosen for special mentions by BBC Music Magazine and Gramophone Magazine.

As Composer in Residence from 201014, Julian Anderson has a close affinity with the London Philharmonic Orchestra and this CD is a celebration of his time at the LPO. This is Julians second release on the LPO label, featuring premiere recordings of Alleluia and In lieblicher Bläue.

Two of the three pieces on this CD were composed specially for these musicians: Alleluia for the London Philharmonic Choir, the LPO and Vladimir Jurowski to perform at the re-opening concert of the Royal Festival Hall in June 2007, and In lieblicher Bläue for Carolin Widmann, one of the leading violinists of her generation.

Anderson is a composer of ringing, bell-like harmonies and subtly shifting orchestral colour. Theres a naive glow about his music, a pearly new-dawn iridescence, as if the world has returned to a state of primal innocence. - The Telegraph, March 2015

Julian Anderson spent four fruitful years as resident composer with the London Philharmonic Orchestra. This, the second disc of his work on the LPO label, includes persuasive recent performances under Vladimir Jurowski of Alleluia, the substantial choral work Anderson wrote for the 2007 reopening of the Royal Festival Hall, and The Stations of the Sun (1998). But the highlight is In Lieblicher Bläue, captured at its premiere last year, a violin concerto in all but name. Inspired by Hölderlins poetic image of a steeple against a bright blue sky, Anderson uses a brilliant orchestral palette to create sonorities that dazzle, suggesting intense colour and almost blinding sunlight. Above and through all this, Carolin Widmanns violin soars serenely. On a recording we lose some of the theatre  Widmann had to walk on to the platform playing, then swap her bow for a pencil, then play with her back to the audience  but the piece is equally strong without it.  Erica Jeal
The Guardian 4 March 2016

Carolin Widman is superb as the often diaphanous, yet frequently impulsive soloist [in In lieblicher Blaue] negotiating an uneasy relationship with the orchestra in this recording of the world premiere. Vladimir Jurowski ensures everything is deftly paced in all three pieces, while the LPOs joyous commitment to new music shines through. Alleluia indeed.  Christopher Dingle
BBC Music Magazine September 2016