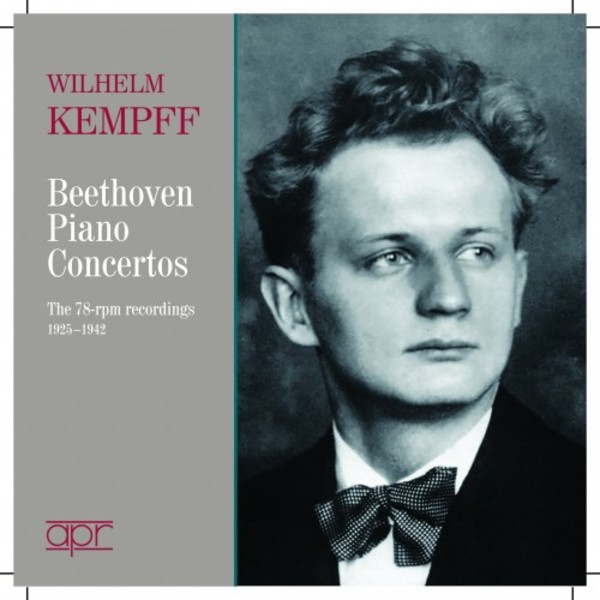 Wilhelm Kempff had such a long life, and recorded so prolifically in the LP era, that we tend to forget that he began his recording career in 1920 in the acoustic period, and recorded much of Beethovens piano output, including four of the five concertos, on 78s.

This set is a companion to the recently issued set of late sonatas (APR6018) and includes what was the first ever recording of Beethovens First Piano Concerto  a late acoustic recording from 1925 which shows the young Kempff was much more sprightly in this work than he later became. In spite of the primitive recording, the energy of the outer movements and the poetry of the slow movement are not compromised. Concertos 3 to 5, in better sound and featuring the greatest German orchestras of the period, reflect state of the art Beethoven interpretation at this time and are a worthy alternative, if less well known, to the Schnabel cycle.

The set is filled out with the first ever CD issue of Kempffs first recording, of a Beethoven Bagatelle and Eccossaises, and a wonderfully extrovert performance of the Rage over a lost penny Rondo.

The set of four of the five piano concertos is memorable for the superlative and beautifully recorded studio accounts of the Third and Fourth concertos, which Kempff made with Paul van Kempen in Berlin in 1942 and 1940. The profoundly felt calm of the slow movement of the Third Concerto has to be heard to be believed, as does Kempff's playing of the recitatives in the slow movement of the Fourth.  Richard Osborne
Gramophone May 2016