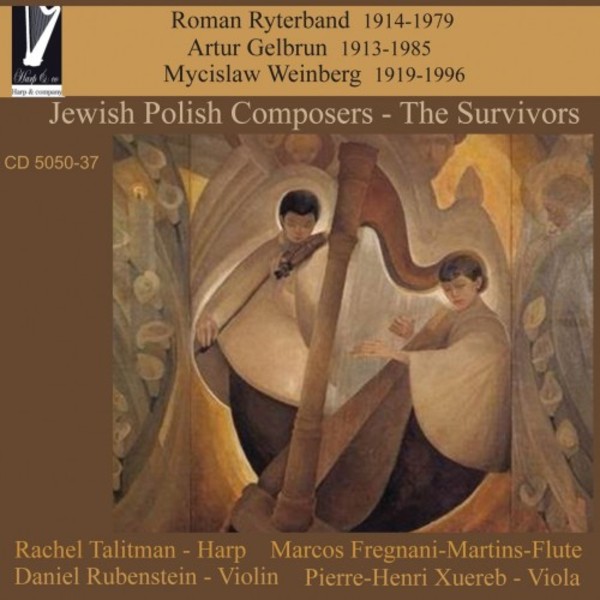 Introduction and Arabesque for harp

Introduction and Arabesque for harp

Roman Ryterband (1914-1979) was born in Lódz, Poland to a Jewish family of musicians and lawyers. Having shown a great love for music at an early age, yet pressured by his father to seek a law degree, Ryterband rebelled and, with encouragement from composer Alexander Glazunov, pursued his dream of a career in music.

He studied at the State Academy of Lódz and the University of Warsaw. In the years leading up to World War II, Ryterband traveled around Europe, gaining fluency in six languages. In 1939, as bombs were falling in Warsaw, he found himself on a deserted beach near Nice, France. From there he hopped the last train to Geneva, Switzerland before the border closed. He continued his studies at the University of Berne where he obtained an M.A. degree in Musicology, laying the groundwork for a career that would include more than 500 public appearances and concerts around the world, garnering him numerous awards and prizes. In 1955 he moved to Canada where he was appointed Director of Music for a Canadian broadcasting company and also became a lecturer at McGill University in Montreal, while continuing his activities as a conductor of orchestral and choral music. Upon moving to Chicago in 1960, Ryterband joined the faculty of the Chicago Conservatory College, still continuing his conducting activities. He also became the chairman of the International Society for Contemporary Music. Ryterband moved last to Palm Springs, California in 1967 and founded and directed this citys Music and Arts Festival, while also teaching at UCLA. He died in Palm Springs in 1979.

Being a composer and a musicologist, Ryterband researched the musical folklore of many nations in both hemispheres and took elements from these other cultures which he incorporated into his own works. Thus, Ryterband studied the musical heritage of the Agua Caliente Band of Cahuilla Indians and integrated his findings into some of his compositions. The influence of Agua Caliente songs is found in the Two Desert Scenes for flute and harp. The Sonata breve, composed in 1961, is particularly concise in thematic material and development, intending to convey its message in the most direct manner. The first movement is virile and vehement, yet yielding to the true nature of both instruments. The second movement flows over into the third in a lively dialogue, which brings back the subject of the Adagio and actually merges both movements into one. The Trois Ballades hébraiques are emotionally charged with tragedy, humour, mysticism and passion, thus reflecting the composer's soul. The violin and the harp provide a romantic light upon the spiritual texture of his triptych.