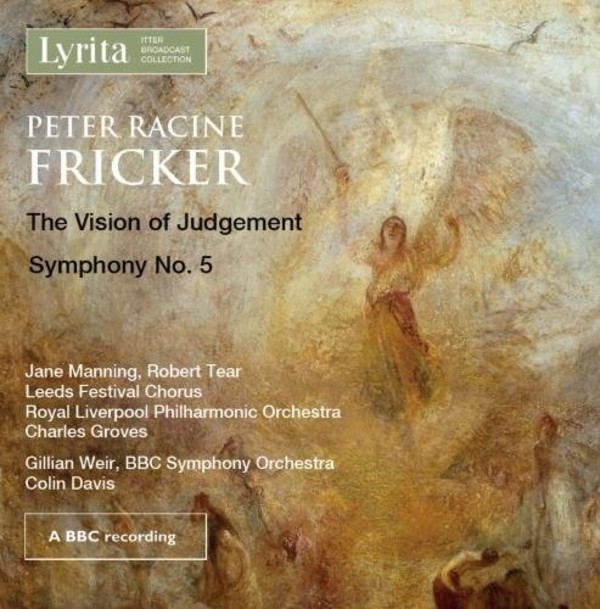 Fricker - The Vision of Judgement, Symphony no.5

Peter Racine Fricker (1920-1990) was among the first composers in Britain to be influenced by the music of Béla Bartók, Arnold Schoenberg and Igor Stravinsky, assimilating aspects of their very different styles into a distinctive musical voice of his own. Unconcerned by the vagaries of musical fashion, he proceeded to build an impressive body of work in his highly expressive, urbane and freely atonal language. His catalogue, which exceeds 160 pieces in total, encompasses all the main genres with the exception of staged opera.

The Vision of Judgement was first performed on 13 October 1958 at Leeds Town Hall as part of the Leeds Centenary Festival. The performance presented here is conducted by Charles Groves, who was familiar with the Fricker style, having taken up the composers First Symphony and performed it in one of his last concerts as conductor of the BBC Northern Orchestra and then introduced it in Bournemouth and on the Continent.

Dedicated to the many fine musicians with whom I have had the pleasure of working so happily in the Royal Festival Hall, Frickers Symphony no.5 was premiered by organist Gillian Weir with the BBC Symphony Orchestra under Colin Davis on 5 May 1976 at the RFH in the presence of the composer. It was featured at the Proms on 11 August 1976 with the organist Jennifer Bate and the BBC Northern Symphony Orchestra under John Pritchard. Terse and direct, the score offers some grand gestures in its lively outer sections which are offset by eloquent dialogues between its two principal protagonists in the interludial central segment. Considerable tension is generated in the closing pages, which present an unbuttoned, euphoric display of bravura.