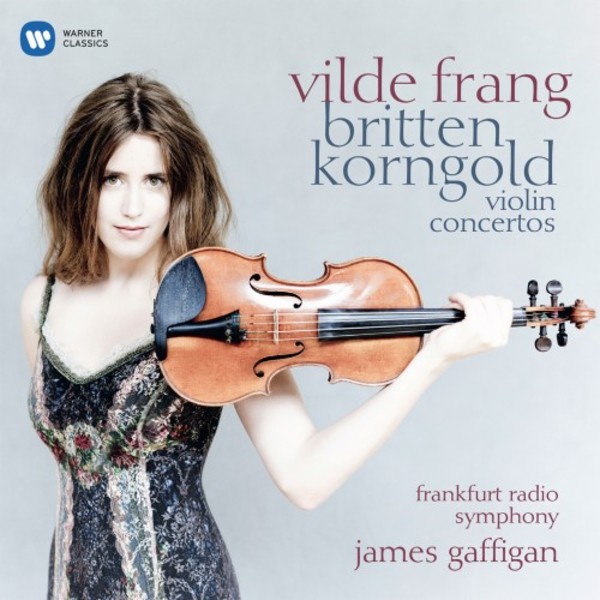 Ive dreamed of recording these two works together for a long time, says Vilde Frang of the violin concertos of Erich Korngold and Benjamin Britten  two highly contrasted pieces that constitute a unique pairing on CD, and which have some fascinating points in common.

This is the young Norwegian violinists fifth Warner Classics release. Early 2015 brought a programme devoted entirely to Mozart, but her previous concerto discs were also notable for imaginative musical matchmaking: Tchaikovsky/Nielsen and Sibelius/Prokofiev.

Both concertos on this new disc were written when their composers were in the USA around the time of World War II: the Korngold was completed in 1945, the Britten in 1939. In the course of the 1930s Korngold, an Austrian Jew, had become a prominent Hollywood composer, but could not return to his homeland after 1938; the young Britten, a pacifist, left the UK for New York shortly before the declaration of war in 1939. Both composers had been child prodigies and both concertos are centred around the key of D, the most natural key on the violin and the tonal focus for the violin concertos of Beethoven, Brahms, Tchaikovsky and Stravinsky.

Vilde Frang describes the Korngold Concerto, which draws on several of his sumptuous movie scores, as champagne, fireworks and indulgence  an ocean of emotions. Korngolds enveloping late-Romanticism is a world away from the more austere (but still sensitive and expressive) aesthetic that typifies Britten. As Vilde Frang says: The first time I heard the Britten Concerto it was a new language for me, but it still spoke to me so strongly  I wanted to learn this language. Many musical commentators have identified a thread of anxiety in the Concerto  hardly surprising in view of the year of its genesis. Perhaps this resonates especially strongly with Frang, who feels that a sense of vulnerability is crucial to the creative process of exploring and interpreting a piece of music.

James Gaffigan, the young American conductor who collaborates with her and the Frankfurt Radio Symphony on this recording, points out that her soaring imagination is complemented by consummate craftsmanship and professionalism. There are very few people who are so full of fantasy, but who can also work with a conductor in such an extremely detailed way  and her tone and the variety of tools she can apply on her instrument are incredible.

Reviews of Vilde Frangs previous discs bear witness to the results she achieves in large-scale concertos of the 19th and 20th centuries: "Frang has the knack of breathing life into every note, whether by variations in phrasing, attack, tone or dynamic  just a few of the weapons in her impressive musical armoury," said  BBC Music Magazine, while The Strad magazine, an authority in the world of stringed instruments, had this to say about her Sibelius:

Even bearing in mind such timeless accounts of the Sibelius as those by Jascha Heifetz [the violinist who premiered the Korngold Concerto in 1947], Isaac Stern and Christian Ferras, Vilde Frang is just that extra bit special. [She] weaves an emotional narrative that is utterly spellbinding  What makes this recording so special is not so much Frangs seductive, sinewy yet voluptuous tone, nor her effortless technical mastery; it is her startling emotional sincerity and inspired musical imagination that rivet the attention. Phrases that one has heard turned with indifference countless times before are nurtured and caressed by Frang with such daring expressive openness and honesty that it feels as though the musics inner soul is being revealed for the very first time.

Playing with almost intimidating dexterity and polish, not to mention impeccable intonation (it comes as no surprise that Anne-Sophie Mutter was an early mentor), her music-making still projects an impression of honesty and naturalness. I found this [Korngold] a deeply satisfying take on a vehicle intended to slake Heifetz's insatiable thirst for technical display rather than to extend Korngold's compositional range. [The Britten] is a remarkable rendition, at once spacious and tautly held together, cool where it needs to be but eminently emotive with just the right kind of 'sweetness'.  David Gutman
Gramophone February 2016

[Vilde Frangs] sound is superb  icy, fiery, whispered, ultra-rich  and her phrases pour out fearlessly, urgently. Its a fresh and convincing performance. She couples the Britten with the 1945 wartime concerto by Erich Korngold and doesnt apologise for its syrupy contours, but also brings out interesting nuances of doubt and fragility. Kate Molleson
The Guardian 29 January 2016