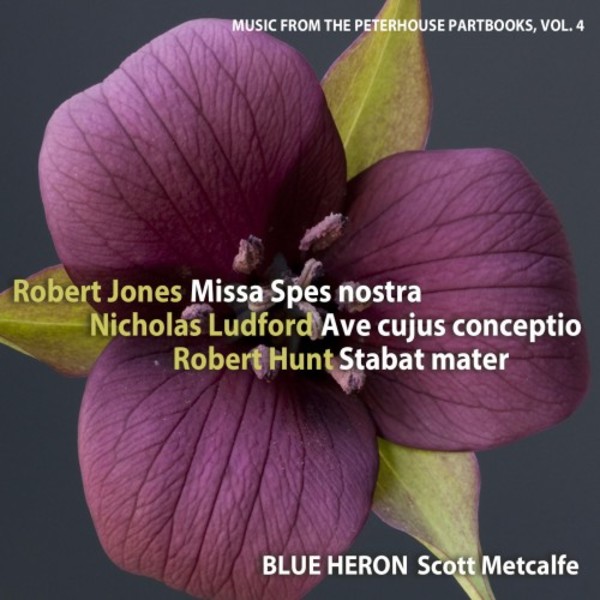 Volume 4 of Music from the Peterhouse Partbooks contains the world premiere recording of the only surviving Mass by Robert Jones (fl.1520-1535), who was employed in the royal chapel during the reign of Henry VIII.

This recording is part of a 5CD project under way since 2010.

A ve cujus conceptio is a pure joy and a major discovery.  The choir does Ludford ample justice, dipping and soaring effortlessly in his long drawn phrases while pointing up the pervasive but never rigid imitation that binds the textures together and prefigures the procedures of such as Tallis and Byrd. [With Hunts Stabat Mater ], both the singing and the crystal clear recording do justice to a hugely enjoyable work, not least at the dramatic cries of Crucifige! and in the extended, heartstirring Amen. - Hugh Leyte , Early Music Review (UK), Sept 1, 2015

[Jones Mass] is, as Scott Metcalfe writes in his notes, the  unique creation of a mature composer with a distinct individual voice. Flowing vocal lines are interspersed with tart, ambiguous harmonies; there is a canny use of musical space, a sense of height and depth to the unfolding structures. As on previous releases, the singing is both precise and fluid, immaculate and alive - Alex Ross, The New Yorker, Aug 24, 2015