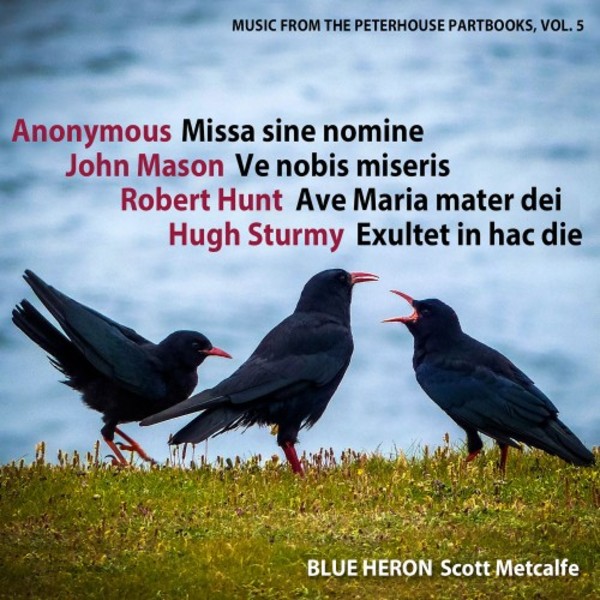 Volume 5 of the acclaimed series, Music from the Peterhouse Partbooks, contains the world premiere recording of a Mass by an anonymous English composer from the first half of the 16th century. Since the source of the cantus firmus has not been identified, the Mass remains without a name (sine nomine). The disc also includes an antiphon addressed to St Augustine of Canterbury which is the only surviving work of Hugh Sturmy, a short and dramatic Ave Maria mater Dei by Robert Hunt , whose Stabat mater is a highlight of vol.3 of the series, and the sonorous and captivating Ve nobis miseris by John Mason, for men's voices in five parts. This recording is part of a 5-CD project which began in 2010. (Volumes 1-4 of the series were released with catalogue numbers BHCD1002, BHCD1003, BHCD1004 and BHCD1005).

The singing is both precise and fluid, immaculate and alive. - Alex Ross, The New Yorker, 24 August 2015

...the Mass in particular is superb. Whoever wrote it almost certainly knew Taverners Gloria tibi Trinitas, for echoes of it abound, yet it is no slavish imitation. For this piece alone the disc is worth owning. The confident rendition of Hugh Sturmys Exultet in hac die sets the tone and the more extended Ve nobis miseris by John Mason gives the male voices a chance to show off, but in the Mass things get seriously impressive. I doubt whether Ill be alone in thinking this one of the discoveries of the year.  Fabrice Fitch
Gramophone October 2017