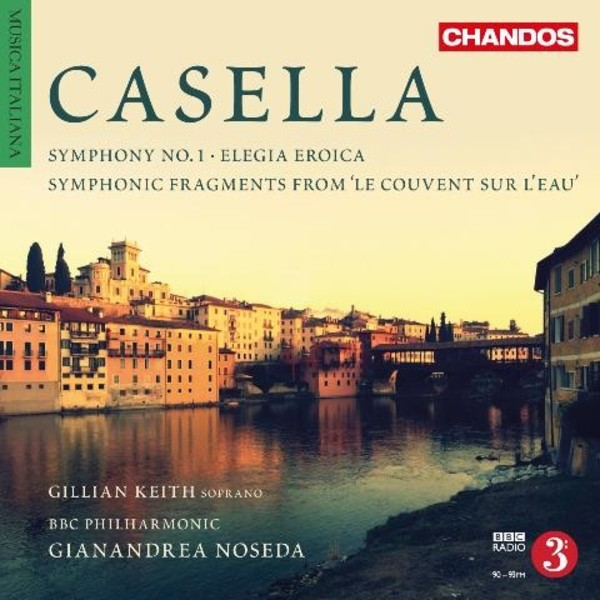 In 1912, with his music for the choreographic comedy Le Couvent sur leau, Casella demonstrated that stylistic versatility was no disadvantage for a ballet composer, and although Diaghilev turned down the work for the Ballets Russes, Casella selected the highly colourful and once popular symphonic fragments, heard here, for concert use.

Similarly, the Elegia eroica is stylistically eclectic, constructed, according to Casella, as a vast triptych, opening with a dissonant funeral march and ending with a comforting, tuneful lullaby. Casella wrote this piece, which he dedicated to the memory of a soldier killed in the war, after Italy had entered the First World War and suffered enormous losses.

The three-movement Symphony in B minor is an early work (1906) of creative energy and burning conviction, in which Casellas enthusiasm for Russian music is revealed already in the sombre Mussorgskyan opening theme. This hypnotic first movement is almost pleasantly oppressive in comparison to the gentler, melodious second, and the bold final movement represents the adventurous exploits of an ambitious young composer.

Gianandrea Noseda's Casella series goes from strength to strength. Casella may be a stylistic chameleon, but this is compelling music, and the works here offer much striking originality amid the fond eclecticism. [...] This sparkling music [Symphonic Fragments] is immense fun, especially in such colourful and fleet-footed performances from Noseda and the BBC Philharmonic, while Gillian Keith's magical vocalise in the Barcarolle is a highlight of the series. Christopher Dingle
BBC Music Magazine February 2016