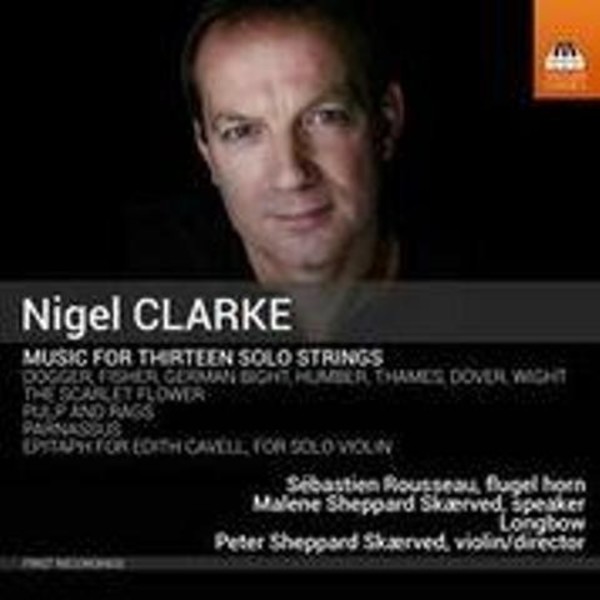 Clarkes engaging and energetic music often takes its cue from a dramatic or poetic impulse. Here it features two tributes to Edith Cavell, the British nurse shot in the First World War, one for solo violin, the other for the unusual combination of flugel horn and strings.

Two of the other works here are musical portraits of the town of Dover: Dogger, Fisher, German Bight, Humber, Thames, Dover, Wight is a diptych where Clarkes music takes over from a poem of Malene Sheppard Skærved; and Pulp and Rags is inspired by the machinery of the lost Buckland Paper Mill, on the outskirts of Dover.

Peter Sheppard Skӕrved has made over 60 critically acclaimed recordings, including cycles of sonatas by Tartini (on Toccata Classics) and Beethoven, quartets by Reicha (also on Toccata Classics) and Tippett, and many of the works written for him, resulting in a Grammy nomination, and awards from BBC Music Magazine. He is married to the Danish writer and poet, Malene Skӕrved, and is the Viotti Lecturer at the Royal Academy of Music, London, where he was elected Fellow in 2013.

Sébastien Rousseau plays with the Brass Band Buizingen in Belgium, in parallel to his work as a musician. Longbow is a virtuoso string ensemble composed of some of todays most adventurous players.