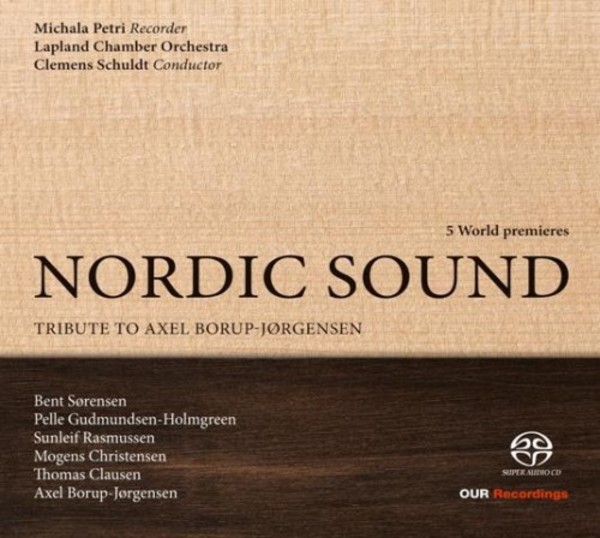 Music for 13 strings. For Axel 'Boje'

Music for 13 strings. For Axel 'Boje'

Five leading Danish and Faroese composers - Bent Sørensen, Sunleif Rasmussen, Thomas Clausen, Mogens Christensen and Pelle Gudmundsen-Holmgreen - were commissioned by Edition Borup-Jørgensen and the composers daughter, Elisabet Selin to write a recorder concerto for Michala Petri and string orchestra. The choice of the recorder was both an outgrowth of Borup-Jørgensens decades long engagement with the instrument and as Petris personal tribute, who became a 'second daughter' to the composer.

Rather than writing music in 'Axels style', each of the composers was encouraged to reflect upon their own feelings and responses to the man and his music, from Christensens shimmering modernism, and Clausens congenial, neobaroque stylings, to the daunting and sometimes dark atmospheres of Sørensen, Rasmussen and Gudmundsen-Holmgreen.

The premieres took place at a sold-out concert at Louisiana Museum for Modern Art on November 14, 2014 by Petri and the Lapland Chamber Orchestra under the direction of Clemens Schuldt. The concert was recorded for the Danish National Radio, and broadcast all over Europe. Immediately after the concert, the whole team went to Lapland to record the program.

Though he left behind no disciples and established no 'school', Axel Borup-Jørgensen was a seminal figure in contemporary Danish musical life and deserving of much wider recognition.