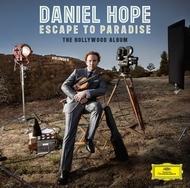 Escape To Paradise  The Hollywood Album

As time goes by

As time goes by

In his latest album, Daniel Hope shines a new light on Hollywood scores as he takes a widescreen musical journey, seeking out the echoes of exiled European composers, such as Miklos Rózsa, John Waxman, Hanns Eisler and Erich Wolfgang Korngold, whose famous Violin concerto is the centre piece.

The album also contains contemporary soundtrack classics such as Schindler's List, American Beauty and Cinema Paradiso, to reflect on the strong musical influence the Exile composer had and still has on contemporary film composers.

Guest artists featuring on this record are no one less than Sting, who performs in a new arrangement on 'The Secret Marriage'  a Hanns Eisler composition (originally with the lyrics of Bertold Brecht, but to which Sting wrote his own lyrics back in 1987)  and German singer phenomenon Max Raabe on the famous 'Speak Low' by Kurt Weill.