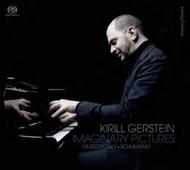 Both Schumann and Mussorgsky were wildly imaginative composers who found ways of expression that went beyond the conventional. On this recording, pianist Kirill Gerstein offers an unusual yet logical pairing of Mussorgsky's 'Pictures at an Exhibition' and Schumann's 'Carnaval': piano pieces in which the layer of the visual and the illustrative gives way to subtler and more personal meanings.

Kirill's first solo recording, featuring works by Schumann, Liszt and Oliver Knussen, was chosen by The New York Times as one of the best recordings of 2010. He has also collaborated with Tabea Zimmerman on two volumes of Sonatas for viola and piano, by Rebecca Clarke, Henri Vieuxtemps, Brahms, Schubert and Franck, all for the Myrios label, released in February 2011 and November 2012.

Born in 1979 in Voronezh, in south western Russia, Gerstein moved to the United States at 14 to study jazz piano as the youngest student ever to attend Bostons Berklee College of Music. After completing his studies he turned his focus back to classical music. Gerstein was the sixth recipient of the prestigious Gilmore Artist Award in 2010, presented every four years to an exceptional pianist who, regardless of age or nationality, possesses broad and profound musicianship and charisma and who can sustain a career as a major international artist. He has shared his prize through the commissioning of new works by Oliver Knussen, Chick Corea, Brad Mehldau and Timothy Andres, with additional commissions scheduled for future seasons.