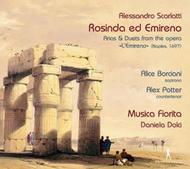 "In 2009, I came across an interesting catalogue entry in the Austrian National Library. It was the opera 'Rosinda ed Emiremo' by Giacomo Perti with obbligato cornett arias. Since this instrument has always played a major role on many of our programmes, I was immediately electrified by this finding. The music turned out to be highly interesting  sweet, sonorous melodies with dialogues between the voice and cornett, a wonderful musical rarity. I soon put together a Bolognese concert programme on which the most beautiful arias from the opera were combined with instrumental sonatas from Giovanni Legrenzis Op.8. The music went together very well and could be so readily combined because Legrenzi had dedicated his Op.8 to Pertis uncle, Lorenzo Perti. In addition, we played an aria from Giacomo Pertis opera 'Penelope la Casta' in which the cornett has a highly virtuoso part.

After the concert and the CD recording, I was contacted by the musicologist Rodolfo Zitellini, who specialises in Perti. He drew my attention to an opera by Alessandro Scarlatti entitled 'LEmireno ovvero il consiglio dellombra', based on the same libretto as Pertis 'Rosinda ed Emiremo'. It was quite a surprise when we realised that not only were the libretti the same, but that the two operas  each aria, each recitative  were absolutely identical! I asked Rodolfo Zitellini to take on this task and, thanks to his painstaking research, we know today that Scarlatti composed the opera, not Perti.

We are most delighted over the solution to this almost criminological puzzle and grateful for this new knowledge. One way or the other, it is clear that the music is magnificent, and it has been a worthwhile endeavour to wrest it from the darkness of the archive." - Daniela Dolci