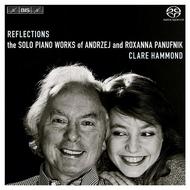 Reflections: The Solo Piano Works of A & R Panufnik

Andrzej Panufnik once wrote Music gets its eternal beauty from an ideal balance of emotion and intellect. Although Panufnik is primarily known as a composer of symphonies and large-scale orchestral pieces, his three original works for solo piano perfectly illustrate this motto. They are all highly crafted, demonstrating the composers fascination with mirror forms and symmetrical patterns.

The young British pianist Clare Hammond is greatly involved in events for the Panufnik Centenary in 2014 and has devised the present disc as her debut release on BIS. She has chosen to include two works that might be described as posthumous collaborations between the composer and his daughter, Roxanna Panufnik, herself an acclaimed composer.

2014 marks the centenary of the birth of Polish composer Andrzej Panufnik. Born in Warsaw on 24 September 1914 to musical parents, Panufnik died in 1991 at the age of 77, by which time he was recognised as one of the most important Polish composers of his generation. Today he is remembered chiefly for his orchestral works (he was also an accomplished conductor, heading the City of Birmingham Symphony Orchestra from 1957 to 1959), but this new disc from BIS concentrates on a smaller and lesser-known corner of his output: his piano music.

As pianist Clare Hammond points out in her illuminating booklet notes, Panufnik's three surviving works for piano intersect key moments of his life and musical development. Panufnik originally studied in Warsaw, then with the conductor Felix Weingartner in Vienna, Paris and London. At the outbreak of war, and against Weingartner's advice, he returned to Poland, where he took part in resistance activities and gave underground concerts. Immediately after the war, Panufnik played a key part in the rebuilding of musical life in Warsaw, re-establishing the Warsaw Philharmonic, conducting, and composing film music to support his family.

His Twelve Miniature Studies date from 1947: they are engaging but technically demanding works, all based on the same melodic line, each contrasting starkly with its predecessor in tempo and dynamics, and following the Circle of Fifths (their original title) from C sharp, through F sharp, all the way round to G sharp. Here they receive a deft performance from Clare Hammond, who charts their contrasting characters with great skill.

From 1948, life in Communist Poland became increasingly difficult for Panufnik, and in 1954, while conducting in Zurich, he managed to give his 'minders' the slip and flew to England, where he remained based for the rest of his life (he was knighted in 1991). While his music had been deemed too progressive in his homeland, in England it was felt by the musical establishment to be too conservative. Nevertheless, following his marriage to Camilla Jessel in 1963 he became increasingly productive. His next piano work, Reflections, was completed in spring 1968, just days after the birth of his daughter Roxanna. It is a contemplative work, whose gaunt mysticism seems to evoke the world of Messiaen's piano music, and it is performed here with great sensitivity and a hushed intensity.

Like Reflections, the music of the Pentasonata of 1984 bears witness to Panufnik's fascination with symmetrical patterns, 'seeking to achieve a balance between heart and mind, intellect and emotion'. It's a powerful piece from his 'late' period, and the title is an apt one, for the work is arranged palindromically in five sections, is based on the pentatonic scale, and its outer sections are cast in quintuple metre. Again, there are moments which come close to Messiaen, and this most ambitious of Panufnik's solo piano works receives a highly persuasive and commanding performance.

Roxanna Panufnik has also become a successful composer in her own right, and the two piano pieces included here are, like her father's, reflective and accessible while setting formidable technical challenges. Second Home (2003) is a set of variations on a Polish folk tune, but also has its jazzy moments, while Glo (2002) is more intimate, a memorial to a family friend.

The programme is completed by two arrangements by Roxanna of her father's music: Hommage à Chopin is a recent adaptation of three evocative vocalises dating from 1949, while Modlitwa ('Prayer') is a beautiful completion and arrangement of a song from 1990. The playing throughout the disc is a joy, and Hammond clearly knows her way around this music in intimate detail. This is an ideal opportunity to celebrate the Panufnik Centenary while exploring some of his less well known repertoire. Strongly recommended!