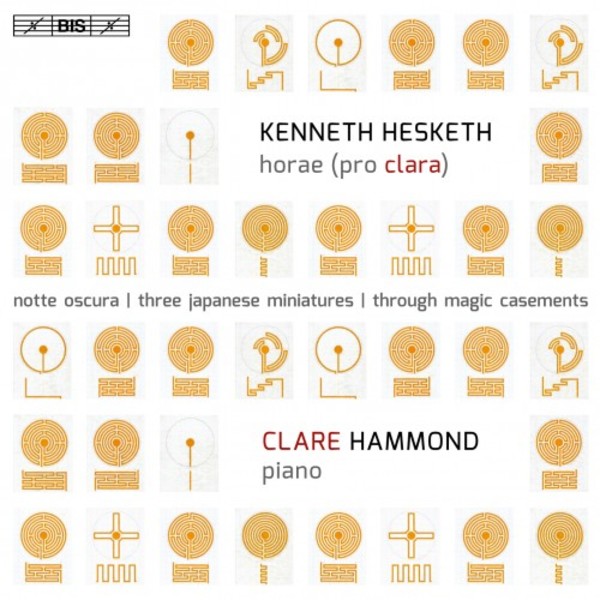 Following up on Etude and Reflections, her recent, highly acclaimed releases on BIS, here Clare Hammond performs music by her compatriot, the British composer Kenneth Hesketh, whose stimuli include classical architecture, medieval iconography, poetry and Bauhaus constructivism. In her liner notes, Clare Hammond describes his works for the piano as music of phenomenal depth in which there is always something new to discover, something to surprise even the most jaded ear.

The centrepiece of the disc is Horae (pro clara), composed for Clare Hammond: a 40-minute cycle in twelve parts that together form a breviary or miniature book of hours. None of the movements are titled, but many are provided with evocative performance directions, for example: as fleet as the tiniest humming bird' and impishly sardonic. Some also incorporate literary references, such as a quote from 1 Corinthians in the twelfth: for now we see through a glass, darkly.

The three shorter works that frame Horae are all earlier works. Notte Oscura was written in 2002 and is essentially a piano transcription of music from Heskeths opera The Overcoat, after Nikolai Gogols short story. Composed in the same year, Three Japanese Miniatures develops material from another stage project, a puppet ballet based on Japanese folk tales entitled The Record of Ancient Matters. The work that opens the disc, Through Magic Casements from 2008, takes its title from another literary source: Keatss poem Ode to a Nightingale. Many of the sonic effects seem to echo imagery in the poem, and the music evaporates at the end, as in Keatss poem: Fled is that music:  do I wake or sleep?