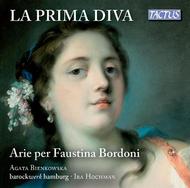 Faustina Bordoni, from Venice, was one of the most acclaimed celebrities in the forerunner of a star system that appeared in the world of Italian opera and thrilled the whole of Europe during the eighteenth century. She was one of the great voices of bel canto, had a marvellous dramatic talent, and passed through the first half of the century as a protagonist, leaving a memorable echo of her passage.

Her career was protracted - from 1716 to 1751, so she intercepted most of the composers of two or three generations, in the major opera centres of Europe: Venice, Naples, Vienna, London and Dresden. The forceful, fascinating personality of this singer (who was born in Venice on 30 March 1697 and died there, in her eighties, on 4 November 1781) filled the musical chronicles with astonishment for decades, and inspired the striking of medals and the writing of laudatory sonnets, obscene verse and satirical pamphlets.

As late as the nineteenth century she was the inspiration of a novel by Elise Polko, and to this day she still communicates with us, rather than in historical reconstructions, through at least two media. On the one hand, we can see her in etchings, caricatures, medals and no less than three portraits by Rosalba Carriera, at the museum of Ca Rezzonico and at the Gemäldegalerie Alte Meister of Dresden. The earliest of the Dresden portraits, made in 1724/25, shows Faustina with her dress mischievously uncovering one of her breasts and a musical score in her hand, about to lavish the enchantment of her voice.

The other, an undoubtedly more moving memory of the immortality of her art, is the music composed for her by the opera composers with whom she worked. Reviving these pieces, which are no longer performed in our time, means re-examining the vocal profile of a protagonist  therefore also, to a certain extent a co-author  of eighteenth-century musical drama.