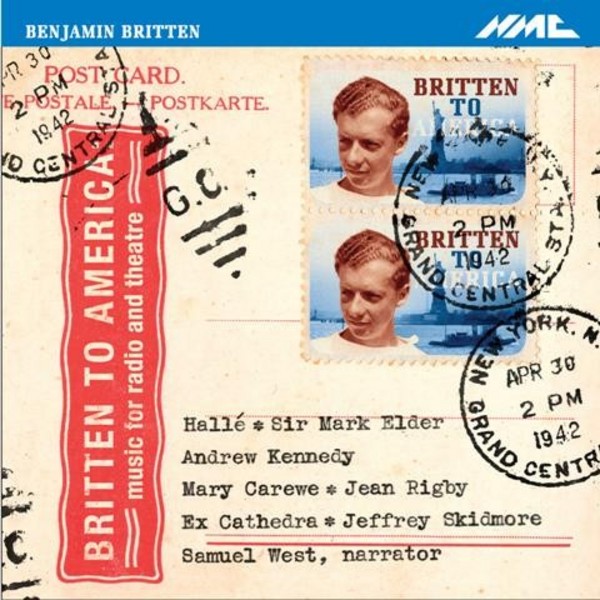 Britten to America: Music for Radio and Theatre

An American in England

» Women of Britain
Britain to America

An American in England

» Women of Britain
Britain to America

What better way to mark the end of Britten's centenary than release some unrecorded works, the majority of which haven't been heard since they were performed in the 1940s. This is Britten with a difference - there are large sections of blues, jazz, a 'Tibetan' chant, a Bach chorale and even a ukulele number!

Britten made the hazardous journey from the United States back to England in the spring of 1942. Within a few weeks he had faced a Tribunal exempting him from military service as a conscientious objector. In his statement to the Tribunal he had said I believe sincerely that I can help my fellow human beings best, by continuing the work I am best qualiﬁed to do, and almost immediately he began giving concerts with Peter Pears in towns, rural villages and prisons.

He also wrote three major scores for radio propaganda programmes: ﬁrst 'Appointment', a BBC drama set in an internment camp in France: then 'An American in England', six programmes about wartime conditions in England produced by the BBC for live transmission in the USA by CBS; and lastly 'Britain to America', three programmes as part of a weekly transmission by NBC. The last of these was completed by January 1943. In spite of the speed with which they were written, the music is elaborate and dramatic  the composer is clearly limbering up for Peter Grimes, whose libretto was evolving during this period.

The British actor Samuel West has appeared in the movies Van Helsing, Iris, Notting Hill, Howard's End and Jane Eyre. He is frequently seen on stage for the Royal Shakespeare Company and also regularly heard in radio dramas.

As the Benjamin Britten centenary year nears its close, heres a fascinating collection of Britten rarities from the NMC label. The title, Britten to America, is an allusion to Brittens contribution to a series of BBC radio programmes in 19423 after he had returned to war-torn Britain from the United States. These were designed to foster Anglo-American relations during some of Britains darkest hours.

The longest of the radio scores included here is the music from the BBC/CBS radio series An American in England. Brittens music  scored for full orchestra and brilliantly realised here by the Hallé under Mark Elder  is atmospheric, touching and occasionally even witty. It aimed to inform American audiences about life in wartime Britain, and contains moments of great poignancy as well as light humour (such as the descent down escalators into the depths of the London Underground). A shorter item is the blues Where do we go from here? for the BBC/NBC series Britain to America (February 1943). Just two minutes long, this is scored for singer and orchestra (mezzo-soprano Mary Carewe in stunning form here), and packs a much bigger punch than its brief duration suggests.

The blues was a style that clearly fascinated Britten in the 1930s and 40s: the only surviving excerpt from Brittens music for the 1937 radio documentary Hadrians Wall (a collaboration with W.H. Auden) is Roman Wall Blues, rediscovered as recently as 2005. This is another winning performance from Mary Carewe, here accompanied by Huw Watkins at the piano.

Though the radio music contain much of interest for admirers of Britten, the most substantial scores here (albeit for smaller forces) are the incidental music composed for two 1937 theatrical collaborations with Auden and Christopher Isherwood. First is The Ascent of F6, a psychological drama about plans to conquer a mountain on the border between a British colony and the fictional rival state of Ostnia. Tenor Andrew Kennedys two songs with ukulele accompaniment (Nigel Woodhouse) are entertaining enough, but its mezzo Jean Rigby who makes the strongest impression in a pair of poignant songs for the heros mother. Theres a pastiche waltz in the overture, monastic chant, a cabaret jazz song, and another haunting blues (Stop all the clocks). The closing chorus, Free now from indignation, is sung to a Bach chorale harmonisation taken straight from the St Matthew Passion.

The singers of Ex Cathedra under conductor Jeffrey Skidmore make welcome contributions to the latter stages of the F6 music, but they really come into their own in Brittens score for the second Auden-Isherwood play, On the Frontier. This tackles the issue of the rise of fascism in the 1930s, with monarchist Westland pitted against fascist Ostnia. Once again there are musical numbers in a variety of styles, including a sophisticated blues for chorus and some biting parodies of militaristic music. As in The Ascent of F6, the instrumental backbone is provided by pianists Mervyn Cooke and Lucy Walker, percussionist Matthew Dickinson is kept busy too, and trumpeters Jonathan Holland and Bruce Nockles are given plenty of faux martial material.

Holding it all together in The Ascent of F6, On the Frontier, and above all An American in England, is narrator Samuel West, with a variety of skilfully deployed accents and the ability  shared with Brittens music  to set the emotional and dramatic tone with just a few short phrases.

Theres a substantial essay from Britten expert Philip Reed, as well as full sung texts. With most of this music appearing on disc for the first time, and a generous playing time of over 78 minutes, this is an essential adjunct to the Decca box of Brittens complete works. But its also a thoroughly engaging programme in its own right, and a most enterprising way to end the Britten centenary celebrations.