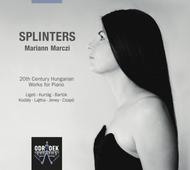 Arthur Rimbaud in the Desert
Ricercare

Meditation on a theme by Claude Debussy
Pieces for piano (7), op.11

Arthur Rimbaud in the Desert
Ricercare

Meditation on a theme by Claude Debussy
Pieces for piano (7), op.11

Pianist Mariann Marczi performs a very personal programme of 20th century works from her native Hungary, featuring pieces that form two pillars at either ends of the last century, grouped between 1907 and 1918 (Bartók and Kodály) and from 1976 to 1989 (Ligeti, Kurtág, László Lajtha, Zoltán Jeney and Gyula Csapó).

Like pylons, these two blocks of compositional styles and techniques are linked by a hidden and complex network of bridges - arpeggios that at times imitate the sounds of the harp, dulcimer or far-away bells, a strong French influence, be it biographical, musical and frequent references to francophone poetry, and a common tendency towards the transcendental.

Marczi has worked together with all of the living composers on her disc, and authoritatively carries out their intentions, while bringing to light the subtle nuances across the interesting and varied landscape of last centurys Hungarian music.

Marczi chose works which have played an important role in either her concerts or academic research: I was fortunate to work with György Kurtág at several of his masterclasses - during the International Bartók Seminar we did an intense and detailed analysis of his Splinters together. I have also worked several times with Zoltán Jeney and Gyula Csapó on their compositions. My doctoral thesis was the first complete survey to analyse all 18 of Ligetis Piano Etudes. I selected my favourite, Fém (which means metal), for this CD. I have presented at conferences on the piano works of Zoltán Kodály and László Lajtha, and I won a prize at the 27th International Smetana Piano Competition Plzen for my performance of Bartóks Three Burlesques.

Marczistudied piano at the Béla Bartók Conservatory in Budapest and later in the citys Liszt Academy of Music, continued her postgraduate studies in Berlin at the Hochschule für Musik Hanns Eisler, and took part in masterclasses with György Kurtág, Zoltán Kocsis and Pierre-Laurent Aimard amongst others. Earning her Doctor of Music degree in 2008, she is a prize-winner in several competitions and has played in the most important Hungarian concert halls and in many European countries.

Premiere recordings of the works by Zoltán Jeney and Gyula Csapó.