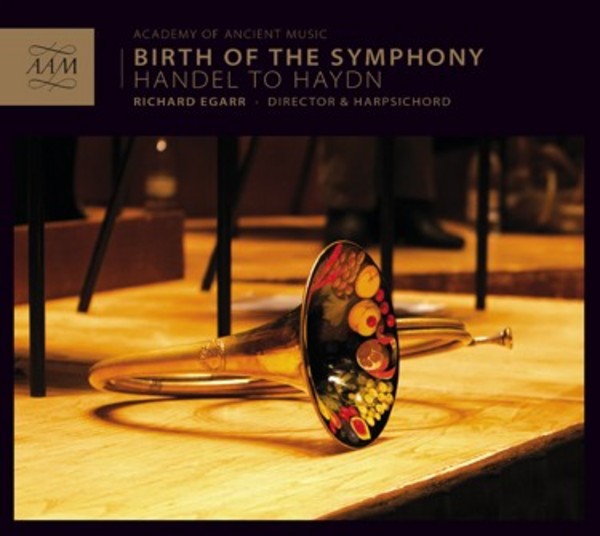 Birth of the Symphony: Handel to Haydn

Grande Simphonie no.7 in C major

Sinfonia a 4 in D major

The Academy of Ancient Music

Grande Simphonie no.7 in C major

Sinfonia a 4 in D major

The Academy of Ancient Music

The first release on AAM Records, the new label of the Academy of Ancient Music  recently described as the finest period-instrument orchestra in the world by Classic FM.

Birth of the Symphony explores the development of the symphony in the eighteenth century, surveying groundbreaking musical advances across Europe. The recording includes brilliant and rarely-heard works by composers of the avant-garde Mannheim school, Richter and Stamitz, as well as Haydns mature La passione symphony.

This first release on the AAM label is a compact yet fascinating survey of the symphonic genre as it emerged from the late baroque and into the early classical era. The works performed span a period of just thirty years, from Handels Saul (1738) to Haydns Symphony No.49 (La passione, 1768), a time of huge expansion in instrumental music when hundreds, even thousands, of symphonies were being produced for a wide variety of functions and audiences, both secular and sacred.

As the Academy of Ancient Musics director Richard Egarr acknowledges, a single disc can barely even scratch the surface of such a geographically and stylistically diverse repertoire, yet this recording manages not only to bring to life the diversity and stylistic developments of the mid-1700s, but also to whet the appetite for more.

It opens with the four-movement Sinfonia to Saul, in a delightfully fresh and buoyant performance, full of Handelian grace and life, and beautifully-shaped solos from the AAMs principal oboe, Susanne Regel. Then come works from two members of the famed Mannheim School: Franz Xaver Richters Grande simphonie No.7 (c.1740)  written before Richter moved to the Mannheim court, but already full of the startling dynamic effects popularised by the Mannheim orchestra  and Johann Stamitzs D major Sinfonia a 4 (c.1750), which is similarly laden with ear-catching effects. Listening to these vibrant performances, one can well understand why Charles Burney described the Mannheim orchestra as an army of generals.

Mozarts Symphony No.1 was written when he was just eight years old during a visit to London (1764), yet although its indebted to many of the stylistic formulas developed by Johann Christian Bach (the London Bach) it still has the stamp of a remarkable musical personality. With oboes, bassoon and horns joining the strings, and the AAMs players employing some nicely judged timbral effects (listen out for the rattle in the last movement!), it makes a thrilling impact here, not least in the haunting tread of the central Andante.

Undoubtedly the greatest work on this disc, though, is Haydns F minor Symphony, nicknamed La passione because of its markedly sombre and extreme expressive moods. Cast in the slowfastslowfast mould of the sonata da chiesa form, its one of the most striking of Haydns Sturm und Drang symphonies, and its emotional depths are a clear harbinger of things to come in the symphonys continued development through the classical and romantic periods. As on their earlier recording of this work with Christopher Hogwood, the AAM here dispense with harpsichord continuo (which wasnt a feature at the Esterházy court), allowing the strings and winds alone to bring out all the stark contrasts of Haydns writing, with challenging tempi in the fast movements, and playing of great expressiveness in the slower movements.

The recording, made at Saint Jude-on-the-Hill in London, is warm but finely detailed, the packaging is attractive, and there are plenty of online extras including videos. Altogether, a highly promising label launch, whetting the appetite not just for more of this repertoire, but more from AAM Records, with several Bach issues already in the pipeline from this team.