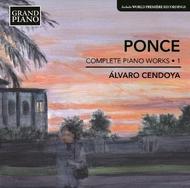 Manuel Ponce was the founder of Mexican musical nationalism, often incorporating the melodies of harmonised folksongs into his music. Widely travelled  he studied in Europe, at first in Bologna and then, between 1925 and 1933, as a pupil of Dukas in Paris  Ponce assimilated a wide range of styles and influences, including Europeaninfluenced Romanticism, indigenous idioms and a more advanced harmonic language. This is the first of eight volumes devoted to Ponces complete piano music.

Álvaro Cendoya started his piano studies in his native Spain, followed by three years of studies in Buenos Aires, and later in London. In 1989 he won the prize for the best interpretation of Spanish music at the international Premio Jaén competition. He made his international début in Geneva in 1995 and at Wigmore Hall a year later. Cendoya went on to give recitals and master classes around the world, including the UK, several European countries, the USA, across South America, in Iran, Beirut, Shanghai and Beijing. He is a professor at the Basque Conservatory of Music.