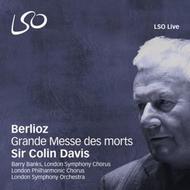 Sir Colin Davis is a revered Berlioz expert and his LSO live Berlioz recordings have been one of the most widely acclaimed series of classical recordings of recent years and collected numerous awards, including two Grammy Awards for 'Les Troyens'.

The release of the monumental 'Grande Messe des morts' marks the completion of this cycle and further confirms Sir Colin Davis' status as one of the greatest living conductors of Berliozs music. Recorded in St Pauls Cathedral, a fitting acoustic for the work, the London Symphony Orchestra opened the 50th anniversary of the City of London Festival with the Requiem, joined by English lyric tenor Barry Banks and two of Londons finest choirs, the London Symphony Chorus and London Philharmonic Choir.

'Grand Messe des Morts' is a popular Berlioz creation, yet remains a rare and special treat. A requiem whose text derives from the traditional Latin Requiem Mass, it was composed, uniquely, by a man with no firm religious belief. Throughout the piece there is an extreme variation of dynamics. Poignant, reflective music is contrasted with four blazing brass ensembles, ensuring a powerful and grand listening experience.

Concert Reviews:
***** "The London Symphony Orchestra played with the kind of brilliant concentration only loyalty and love can command, and the 150-strong choir, drawn from the London Symphony Chorus and the London Philharmonic Choir, sang with controlled power and beauty. Whomever you chose to thank and praise for it, this was an awesome night." - The Guardian

"Opening and closing sections displayed unusually concentrated gravity and a sculptural poise. Davis respected the echo, gave it space and cherised the austere as much as the dramatic, like those woodwind chords intoned in the Agnus Dei  so solemnly gorgeous that my spine tingled." - The Times

"In an evening full of arresting otherworldly sounds, the most striking were the quiet ones toward the end, especially the high solo strings and delicate brushed cymbals of the Sanctus, with Barry Banks fevently high tenor coming as from afar. Presiding over all this was the wise, benevolent presence of Sir Colin Davis, who conducted the piece in this same space nearly 50 years ago. He showed an unerring sense of pacing, and revealed the pathos and restrained dignity underlying the musics noisy tumult." - The Telegraph