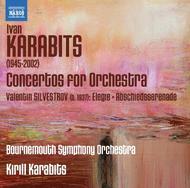 Following Ukraines independence in 1991, Ivan Karabits became the countrys leading musical figure. An inspirational composer, artistic director and teacher, he absorbed into his own music three particular traditions: Mahler, Shostakovich, and the folk-music of his native country. The colourful, virtuosic and at times theatrical Concertos for Orchestra reflect the influence of his friend and mentor, Rodion Shchedrin.

Following Karabits untimely death, his compatriot Valentin Silvestrov composed two heartfelt memorials. The first of these, Elegie, makes use of Karabits own unfinished pencil sketches which sit side by side with Silvestrovs own ideas as the piece progresses, almost as if it were a dialogue between the two friends about their work.

Karabits was an inspiring figure, but his music has not been much recorded. These three Concertos for Orchestra are both brilliantly conceived and richly, indeed virtuosically orchestrated  modern orchestral music rooted in tradition.

Kirill Karabits was appointed Principal Conductor of the Bournemouth Symphony Orchestra in 2009, his contract extended to the end of the 2015/16 season. He is the son of the composer Ivan Karabits.