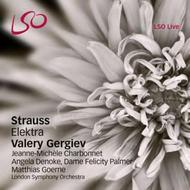 Valery Gergiev conducts Strauss 'Elektra', one of the most powerful operas in the repertoire, accompanied by a superlative cast. Premiered in 1910 at Covent Garden, under the baton of Sir Thomas Beecham, 'Elektra' showcases many of what were at the time modernist techniques, such as dissonance, chromaticism and fluid tonality - but also some of his finest writing.

The one-act Greek tragedy was reconstructed by Hugo von Hofmannsthal, and his adapted text forms the libretto for the opera. The drama centres around Elektra and her determination to avenge her fathers death. The themes of death, violence, sexual repression and revenge are omnipresent.

American soprano Jeanne-Michèle Charbonnet is recognised as a leading force in German and contemporary music repertoire and a great singing actress.

Angela Denoke and Dame Felicity Palmer both possess outstanding pedigrees in Strauss' opera. They are joined by outstanding Lieder specialist Matthias Goerne, making one of his rare forays into operatic repertoire.

Concert reviews:
"With the London Symphony Orchestra playing with spectacular virtuosity and total commitment, Gergiev set the temperature at boiling point from the first explosive bar, and the effect was instantly scalding ... youd be unlikely to find a staged Elektra as well sung or played as this one was" - The Daily Telegraph

"Gergiev drew magnificent playing from a gargantuan LSO...Palmers handling of her dream-monologue, her guilty mind shredded like a gown eaten by moths, was a tour de force. Charbonnet ... rippled with intelligence and nuance" - The Observer

"Felicity Palmer touched tragic depths as Clytemnestra, and Angela Denoke was formidable in her depiction of the seething emotions behind Chrysothemiss cool facade" - The Guardian

"the night belonged to the London Symphony Orchestra. Theres no doubting the passion Gergiev feels for his players, fluttering his fingers lightly over the air almost as if it were unnecessary to command their mightiest efforts" - The Arts Desk