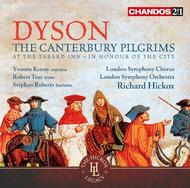 Dyson - The Canterbury Pilgrims, At the Tabard Inn, In Honour of the City of London

At the Tabard Inn: Overture
In Honour of the City of London
The Canterbury Pilgrims

At the Tabard Inn: Overture
In Honour of the City of London
The Canterbury Pilgrims

This re-release of The Canterbury Pilgrims forms part of the new Hickox Legacy commemorative series on Chandos Records, leading up to (and continuing beyond) the fifth anniversary, in November 2013, of the conductor's untimely death.

The pioneering account of The Canterbury Pilgrims, a colourful but neglected work by Sir George Dyson, brilliantly depicts assorted characters from the prologues of Chaucers famous Canterbury Tales, while highlighting key aspects of Richard Hickoxs recorded legacy: the championing of neglected repertoire in general, and British repertoire in particular, as well as his special affinity with choral music.

Dyson described The Canterbury Pilgrims as a work for chorus, orchestra and three soloists, placing the emphasis firmly on the chorus  appropriate, as the work gets much of its momentum and swagger from the dramatic and highly effective choral writing. In fact, the practical needs of the English choral movement lay at the very heart of this work. Dyson had been troubled by the fact that music of the past was exercising an increasing domination of the concert repertoire, and recognised that major English works such as Vaughan Williamss 'A Sea Symphony' and Deliuss 'A Mass of Life' were beyond most choral societies. The music that sprang from these concerns was uncomplicated, vivacious and tuneful, and not surprisingly it proved an instant success with many choral societies.

When first released, this recording was well received by BBC Music Magazine, which wrote: Chaucers amusingly ironic depictions and Dysons memorable tunes and imaginative orchestration are a winning combination. If you like Gerontius, Vaughan Williams and Ireland, youll like Dyson. Go out and buy this disc *****.

Gramophone echoed the sentiment, particularly commenting on the quality of the sound: This is a very fine recording Every layer in the texture is exceptionally well defined and integrated, which is no mean feat when such elaborate forces  soloists, choir, and orchestra  are involved.