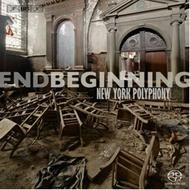 The four members of New York Polyphony here present a programme which explores the themes of grief, loss and mortality.

Apart from the work by Jackson Hill on Guillaume de Machauts famous 14th century rondeau Ma fin and two examples of plainsong, all the works included on this disc (the ensembles first on BIS), were composed by masters of the Franco-Flemish school of polyphony from the first half of the 16th century.

Most of this music was partly used liturgically: the two Gregorian chants Libera me and In paradisum both form part of the Roman Catholic burial service.

New York Polyphony was formed in 2006 and is establishing a reputation as an exceptionally fine vocal chamber ensemble.