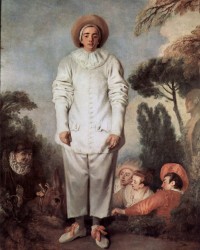 Watching the marvellous new production of Korngolds opera Die tote Stadt from the Bavarian State Opera reminded us of, among other things, a key emblem of early modernism: the figure of Pierrot, the sad, moonstruck, white-face clown. For the best part of three decades from the 1890s, this French character from the commedia dellarte (as imported to Paris by the Comédie-Italienne in the 18th century) became the focus of a new generation of creative artists  writers, painters, actors, film-makers and musicians  who were rebelling against the inflated late-Romantic archetypes of Wagnerian-Schopenhauerian aesthetics, seeking something more fractured, ironic, artificial and subversive to reflect the psychological masks, the isolation and anxieties of urban society at the turn of the century. The commedia dellarte in general, with its roots in popular, low culture, its stereotyped masked characters (among them Harlequin, Colombine and Pulcinella), amoral and irreligious attitudes, trestle-stage theatricality, and refusal to take itself seriously, suited their needs to perfection. Pierrot in particular, with his black skull cap, white, expressionless face and single black teardrop, and loose-fitting white costume with wide, long sleeves, lovelorn yet curiously androgynous, was the ideal embodiment of the modern age: at odds with the grandiose certainties of the Romantic era, and with more than a hint of madness about him.

Pierrot had emerged as a central character of the commedia dellarte in the course of the 18th century, famously captured in the paintings of Antoine Watteau (1684-1721), where his stationary figure forms a passive focus, staring straight at the viewer, around whom his more animated companions go about their business. On the stage itself, the most famous of all Pierrots was Jean-Gaspard Deburau (1796-1846), a brilliant mime artist at the Théâtre des Funambules whose many admirers came from all walks of life, as immortalised in Marcel Carnés epic 1945 film Les Enfants du paradis, starring the equally brilliant Jean-Louis Barrault as Deburau/Pierrot. In literature, key figures in the turn-of the century Pierrot movement were the symbolist poets Jules Laforgue (1860-1887) and Albert Giraud (1860-1929), whose Pierrot lunaire: Rondels bergamasques (1884) provided the basis for Schoenbergs celebrated (or notorious) Pierrot lunaire of 1912 in Otto Erich Hartleben's German translation.

Pierrot lunaire is the most famous of the Pierrot works from this period, but it is far from being the only one. And the appeal of the character went well beyond the Symbolists of the early 20th century. Schoenberg's atonal musical language in Pierrot lunaire seems the very embodiment of high art, but the Sprechgesang (speech-song) of the female reciter, and the ad hoc nature of the instrumental ensemble, are redolent of the world of cabaret, and it was Pierrot's ability to straddle the worlds of high and low culture  his mixture of nostalgic introspection with tragi-comic subversiveness and bottled-up passion  that made him such a potent figure for the young generation of the post-Romantic years.

Reacting against the confident, nature-drenched daylight of the Romantics, these new artists were creatures of the night (and many of them  such as the Sitwells in Britain or Franziska zu Reventlow in Munich  party animals): not, however,  the headily intoxicated nocturnal sensuality of Schopenhauer and Wagner, as represented in Act 2 of Tristan und Isolde, but a more fragile lunar nightscape, where the moon holds mysterious sway over emotions, and adds a touch of lunacy quite unlike the mad scenes of Romantic opera. If Schoenbergs Pierrot remains the richest embodiment of this moonstruck figure, other iterations are worth our attention too. In Bergs 12-tone opera Lulu (1929-35), based on the plays of Frank Wedekind, Lulu herself is first seen modelling in a Pierrot costume, while the artifice of the works opening, as the audience is addressed directly by the Ringmaster, is pure commedia theatricality. The spirit of the commedia dellarte is central to the ballet Parade (1917), a scandalously brilliant collaboration between Satie, Diaghilev, Massine and Picasso, while in both Leoncavallos Pagliacci (1892) and Stravinskys Petrushka (1911) the title characters inherit many of Pierrots tragic, lovelorn traits.

Notwithstanding the rather arch subversiveness of Waltons entertainment Façade (1923), British commedia- and Pierrot-influenced works tended to be rather better behaved. Cyril Scotts Two Pierrot Pieces of 1904 are cast in a rich late-Romantic idiom tinged with hints of impressionistic colour and playfulness, while Granville Bantocks sparkling comedy overture Pierrot of the Minute (1908, after the 1897 Dramatic Phantasy by the English Decadent poet Edward Dowson) contains strong echoes of Paul Dukass Sorcerers Apprentice. Ethel Smyths one-act opera Fête galante (1923), with a cast including no fewer than four commedia characters  Columbine, Pierrot, Pantalone (silent) and Harlequin  is fascinating as her only composition in the neoclassical style, just three years after Stravinskys Pulcinella.

Other commedia dellarte operas include Strausss Ariadne auf Naxos (1912), pitting low comedy against high art in memorable fashion, and Busonis one-act Arlecchino (1913), on the surface a pure commedia-style scenario, but actually a carefully structured, morally ambiguous but somewhat self-conscious anti-war satire. The chronological proximity of these two very different operas attests to the wide percolation of the commedia spirit into the cultural mainstream of the period. Searching more widely and scratching only slightly beneath the surface, you can find commedia characters in an astonishingly wide range of works, from Mozarts Marriage of Figaro (1786) and Verdis Falstaff (1893) to Birtwistles Punch and Judy (1968) and beyond  a testament to the seminal dramatic influence of this semi-improvised form of popular theatre across the centuries. But the early 20th century was unquestionably a heyday, when Pierrot in particular exerted a powerful, lunar-like pull on young creative minds. It was perhaps inevitable that this rebellious yet somewhat effete movement would run out of steam amid the growing horrors of the 1930s, yet while it lasted it was quite a party, whose stylistic and aesthetic reverberations can be felt to this day.
A few recommendations (click on catalogue number for link):
Schoenberg - Pierrot lunaire:
- ALPHA722 (Patricia Kopatchniskaja): a wildcard performance which captures the audacity of the original
- CHAN6534 (Jane Manning / Nash Ensemble): an atmospheric, exciting yet musical performance from the late Jane Manning
Satie - Parade: featuring Picassos original designs, Blu-ray only (released 27 August 2021) 109440
Smyth - Fête galante (Martinez et al.) RO007
Busoni - Arlecchino (coupled with Busonis Turandot, another commedia work) C5398
Further reading:
Martin Green & John Swann - The Triumph of Pierrot: The Commedia dell'Arte and the Modern Imagination (Pennsylvania: Pennsylvania State University Press, 1986, rev. 1993)

The Curious Revival of Bruckners Sixth

For many years, the Sixth was regarded a the Cinderella among Bruckners symphonies. The shortest of all his mature symphonies, as well as the least performed and recorded, in the composers output it is squeezed between the mighty edifices of the contrapuntally complex Fifth and the monumental but intensely lyrical Seventh (a fate similar to that of Beethovens Fourth, perhaps his most underrated symphony). When one thinks of Brucknerian pilgrims paying homage to the master in the secular temple of the concert hall, it is... read more

The creative output of Marcel Proust  the 150th anniversary of whose birth falls this week  is drenched in the French culture of his time: La Belle Époque and the vibrant social and artistic atmosphere of turn-of-the-century Paris and its environs. Music plays a key part in Prousts monumental seven-volume novel À la recherche du temps perdu (In Search of Lost Time), above all in the enigmatic Sonata by the fictional composer Vinteuil, a phrase from which triggers an instance of involuntary memory for one of the main... read more

This evening to Siegfried. I rate it as highly as Tristan. Its so wonderfully great and youthful. Schmedes was brilliant. Teutonic, boyish. A guest, Lieban, was terrific too. Sedlmair was in top form. The forging scene. The Wotan-Erda dialogue. Forest murmurs. The Magic Fire Music, incomparably finer than in Die Walküre. And the closing scene Yes everything, everything. Every word, every note. A miracle!
Thus wrote the 20-year-old Alma Schindler (later to be Alma Mahler, Gustavs wife) in her diary for 6... read more

You dont have to know much about classical music to know that an awful lot of guff has been written about its universal message and worldwide appeal. If that is so, how come so many of its key figures are dead, white, and male (or, in snappier terms: male, pale, and stale)? For many younger audiences, the Beethovenian ideal of universal brotherhood will not only seem archaically exclusive, but also suspiciously binary. Among those who have long been relegated to the sidelines of western art music  when not completely... read more

The changes in the classical record industry over the past four decades have seen the end of many once-lucrative contracts between orchestras and the big labels of old: EMI, Philips, Deutsche Grammophon, Decca, RCA and CBS (Remember the exclusive contract the Vienna Philharmonic had for many years with Decca, the orchestras logo proudly emblazoned on the record sleeves?) However, the technological changes that prompted this demise have also offered new opportunities. Since the turn of the millennium, orchestras and... read more