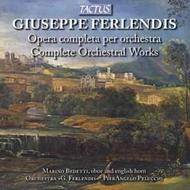 Featured are three Oboe Concertos, the first for the solo instrument and Nos 2 and 3 for oboe and flute, and another for Cor Anglais, alongside his Sinfonia in E flat major.

Born in Bergamo, Giuseppe Ferlendis was one of the most acclaimed cor anglais and oboe player of the second half of the XVIIIth century and made a great contribution to the development of the double reed instrument. In 1777 he became chief oboist in the orchestra at the court of the prince and archbishop of Salzsburg, and during this period he met and made friends with Wolfgang Amadeus Mozart, who wrote his Concerto for oboe and orchestra, K.314 especially for Ferlendis. As was the case with many other instrumentalists of the same period, Giuseppe Ferlendis was also a composer and wrote several works to perform himself.