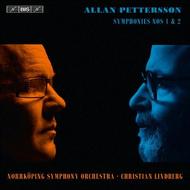 It was towards the very end of the 1940s that he began to compose his Symphony No.1. He soon laid the work aside, but in subsequent years  and possibly as late as in the 1970s  he kept returning to the sketches. He certainly never abandoned the symphony, and in 1953 when he completed a second symphony, he insisted on calling that work his 'No.2'.

On two previous discs, Christian Lindberg has conducted Pettersson's Three Concertos for String Orchestra as well as the orchestral versions of the Barefoot Songs. These were released to great acclaim. Entrusted with the manuscript material  some 240 pages  of Symphony No.1, Lindberg was able to prepare a performable version and gave the work its world première in May 2010, conducting the Norrköping Symphony Orchestra.

His recording of the work  and of Symphony No.2  is accompanied by a DVD with an hour-long film by David Lindberg about Allan Pettersson's First Symphony, documenting its genesis, the preparation of the performance edition and the path to the work's first performance and subsequent recording.

Contents:
- Symphony No.1
Performance edition by Christian Lindberg from the original score, left incomplete by the composer
World Première Recording
- Symphony No.2

Bonus DVD: An hour-long film by David Lindberg about Allan Petterssons First Symphony and the preparation of the score.