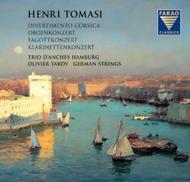 This release is timed to commemorate Henri Tomasis 110th birthday in 2011, as well as the 40th anniversary of his death.

Henri Tomasis international breakthrough as a composer did not come until after the second world war, although in his native France he had had tremendous success with such works as Cyrnos, Vocero and Tam Tam, placing himself in the front row of the greatest French composers of the day.

Two of the three concertos presented on this CD (for clarinet and bassoon) were commissioned by the Paris Conservatoire as entry audition pieces. The third concerto (for oboe), which was written at the same time as the ballet Jabadao, is based on the same musical material and moulds this into traditional concert form. The beginning of the oboe concerto is reminiscent of a Vocero, which is a ceremony performed for the deceased, in which a woman who was professional mourner would declaim dirges and songs of lament.

The Divertimento Corsica comes across as a small conglomeration of Corsican dances and melodies. In four scenes, full of atmosphere, Tomasi tells us of his beloved island home.

The four works do not as yet form part of current theatre repertoire, so they are a treasure trove for collectors of rare music. This is also the first time ever that the oboe concerto has been issued on arecording.