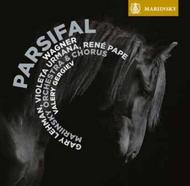 Wagner himself conducted at the Mariinsky Theatre, the start of a long association with his music, and in 1863 it was the location of the first performance of music from his, as yet, unstaged Ring Cycle.

Over the past decade Valery Gergiev has become a frequent conductor of Wagners operas, establishing a formidable reputation in the repertoire, although remarkably this is his first recording of the composers operas.

Wagner described his final complete opera as a A Festival Play for the Consecration of the Stage and the work has always sparked controversy, mixing moral and religious themes with music of irresistible sumptuousness. It was inspired by Wolfram von Eschenbachs Arthurian poem Parzifal. Yet despite the storys overt Christian imagery, Wagner also draws on ideas from other beliefs including Buddhism. The harmonic experiments that he adopted for his previous opera Tristan und Isolde are further refined to create music of astonishing beauty that still retains and reflects the deep morality of the tale.

Above all, this is Gergiev's Parsifal and it is the superlatively good playing of the Mariinsky Orchestra that, with René Pape's gloriously sung Gurnemanz, makes this new set essential listening for Wagnerians - Hugh Canning , IRR September