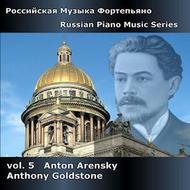 Anton Arensky was a pupil of Rimsky-Korskov, and succeeded Balakirev at the Court Chapel in St. Petersburg. The body of work he produced in his short lifetime featured operas, choral music, a number of orchestral works (including two symphonies), chamber pieces, songs, and several works for solo piano. He has been described as one of the most eclectic Russian composers of his generation, and the influence of a good number of composers are evident in his work. He had an easy command of keyboard textures and produced some beautiful miniatures  many of which are present on this recording.

Described by The New York Times as a man whose nature was designed with pianos in mind, Anthony Goldstone is one of Britains most respected pianists. A sixth-generation pupil of Beethoven through his great teacher Maria Curcio, Anthony Goldstone was born in Liverpool. He studied with Derrick Wyndham at the Royal Manchester College of Music (which later honoured him with a Fellowship), later with Curcio in London.

He has enjoyed a career encompassing six continents, the Last Night of the Proms (after which Benjamin Britten wrote to him, Thank you most sincerely for that brilliant performance of my Diversions. I wish I could have been at the Royal Albert Hall to join in the cheers), very many broadcasts and nearly seventy CDs (including the BBC issue of his London Promenade Concert performance of Beethoven's fourth Piano Concerto).

This CD was released very briefly on Olympia, but was not widely available as the label ceased trading shortly afterwards.