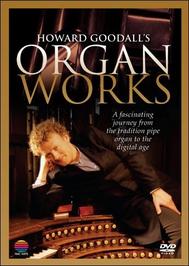 This award-winning series of four half-hour programmes, written and presented by the irrepressible Howard Goodall, gives a fascinating and humorous insight into the world of the organ and endeavours to explain why, for some people, this bold, colourful and beautiful instrument has an irresistible power.In the ancient world, it played a part in public spectacle, and was used by the Romans at gladiatorial contests. It evolved through medieval and Baroque times when Martin Luther converted popular folk melodies into hymns, and ultimately the Lutheran hymn book was produced, a sort of melodic greatest hits of the day. It is hard to overstate the influence on the organ of JS Bach, whose music is the finest ever written for the instrument, giving it a distinctive, living voice.Moving to modern times, we look at how the Wurlitzer and Hammond B3 have brought organ music to new audiences and new generations. Goodalls journey takes him to gems of the organ world in Spain, France, Germany, Holland and also in the USA, to churches, cathedrals, castles and parks, West Point Military Academy and to one of the wonders of the musical world, in a Philadelphia department store! Ultimately Goodall examines the future of the traditional pipe organ in the face of competition in the digital age, concluding that given its history and popularity, there will always be a place for the magnificent and majestic original.Howard Goodalls Organ Works were shown on Channel 4 in 1996, and won the following awards:1997 Royal Television Society Award for Best Original Music1997 New York Festival Silver Award for Best Arts Programme