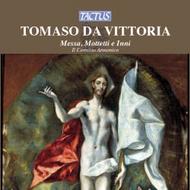 Unlike many of his fellow countrymen who had always lived and work in Spain, the Castilian Tomás Luis de Victoria spent many years of his life in Italy, studying and working in colleges and churches in Rome: this period influenced his artistic and musical development considerably.

The works by Tomás Luis de Victoria on this CD were composed from his early days in 1572 to his maturity in 1585.

The mass for four, six and eight voices O quam gloriosum, from the Missarum libri duo, is dedicated to the King of Spain, Philip II and was printed in Rome by Alessandro Gàrdano, in 1583.