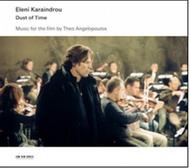 Eleni Karaindrou - Dust of Time (music for the film)

Eleni Karaindrou (Greeces most eloquent living composer - Time) has written the best-selling music for many films by legendary director Theo Angelopoulos, playing a crucial role in shaping their emotional climate. None more so than for his new movie Dust of Time, starring Willem Dafoe, Irène Jacob and Bruno Ganz, where Karaindrous music has a special, gentle and intimate character.

Each of Karaindrous albums reveals an unmistakable autonomy. Dust of Time has a special, gentle and intimate character, with violin, harp, cello, oboe and accordion given central roles.

Eleni Karaindrou was born in the Greek mountain village of Teichio. She studied piano and musical theory at the Athens Hellenic Conservatory, history and archaeology at the University of Athens, and ethnomusicology and orchestration in Paris.

Since 1975 she has composed music for over 20 feature films, and more than 40 theatre plays and television productions. Collaborating most often with Greek directors  above all Theo Angelopoulos, with whom she has had an ongoing creative association since 1983  she has also worked with Harold Pinter, Chris Marker, Jules Dassin, Margarethe von Trotta and others. Karaindrou has received numerous awards, including the State Music Award (Greece) for her music for 'Eternity and a Day', the Dmitris Mitropoulos Award for her music for theatre (1994-96) and the Fellini Award from Europa Cinema, Italy.

In 2002 she received the Golden Cross of the Order of Honour from the Greek president, for her lifes work. In 2004 she was nominated for the European Film Award for her music for 'The Weeping Meadow', which was also Oscar-nominated.