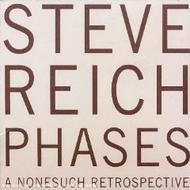 In 1966, at the age of thirty, I formed my first ensemble of three musicians.  The possibility that in forty years there would be festivals of my music around the world to celebrate my 70th year was unimaginable.  Steve Reich "Theres just a handful of living composers who can legitimately claim to have altered the direction of musical history and Steve Reich is one of them." - Guardian Phases: A Nonesuch Retrospective is an essential CD companion to the extraordinary range of events scheduled to take place in the United States and Europe in autumn 2006 to celebrate the work and life of composer Steve Reich, who turned 70 years old on October 3 (2006).  The most ambitious was an 11-day festival at the Barbican Centre in London, also entitled Phases, which featured an impressive range of concerts, art installations, films and lectures.  Similar tributes were planned in New York City, Denver, Los Angeles, Dublin, Barcelona, Vienna and Helsinki, among other locations.  The title of this five-disc set is itself a variation on a theme: referencing the out-of-phase tape-loop technique that Reich employed in his groundbreaking early pieces as well as the upcoming events on two continents.  More than anything, though, Phases represents and amply illustrates the remarkable, ever-evolving nature of Reichs work, which long ago transcended the tag of Minimalism.As New Yorker music critic Alex Ross puts it in the liner notes to this box, Reichs influence is vast, reaching far outside classical composition to encompass jazz, rock, pop, electronic music, and hip-hop.  On some days, as familiar shimmering patterns echo on the soundtracks of commercials and from the loudspeakers of dance clubs, it seems as though we are living in a world scored by Reich.Conductor David Robertson of the St. Louis Symphony, in a short appreciation also contained in the sleeve notes, concurs: Steves music deals with the most profound secrets of how music comes into being. Steve not only sees the world in a grain of sand, he sets it vibrating.Phases opens with what is arguably Reichs signature work, Music For Eighteen Musicians, performed by Reich and his longtime ensemble.  However, each piece here, culled from Reichs Nonesuch discography, warrants a significant spot in any overview of his career, from the semi-autobiographical, often deeply moving Different Trains, played by Kronos Quartet, to the rhythmically and spiritually adventurous You Are (Variations), written for, and performed by the Los Angeles Master Chorale.  After its 2004 premiere, the Los Angeles Times declared, With You Are, the Master Chorale got a masterpiece.  Among the artists and ensembles featured in this set are guitarist Pat Metheny, cellist Maya Beiser, Bang on a Can, and the London Symphony Orchestra.I never thought Id look forward to turning 70, says Steve Reich.  To say Im honoured is definitely an understatement.