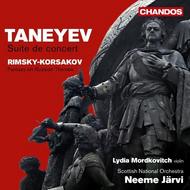 Russian Fantasy in B minor for Violin and Orchestra, op.33

Russian Fantasy in B minor for Violin and Orchestra, op.33

Lydia Mordkovitch, the Royal Scottish National Orchestra and Neeme Järvi have a lustrous history of performing Russian works for Chandos, including the violin concertos of Prokofiev, Khachaturian and Shostakovich, the two concertos of the latter winning the Gramophone Award.

They return with two seldom heard works by Taneyev and Rimsky-Korsakov. The Suite de concert is a relatively late, and the only, work for violin and orchestra by Taneyev, and this recording - only its second - is currently the only one available. The work was dedicated to the great violinist Leopold Auer, whom Taneyev had known for over thirty years. Its conception represents a fusion of several different traditions  the idea of an updated baroque suite and baroque dance, the high romanticism of Schumann, and Taneyevs mentor Tchaikovsky. But the Suite de concert is also a formidable display piece, designed to show off the technique of a violinist of the highest calibre, evident from the very opening where the soloist enters immediately with a brilliant cadenza-like passage of scales, arpeggios and trills, establishing a level of Paganini-like virtuosity from which the music seldom declines. This monumental work for the violin is here coupled with the Fantasy on Russian Themes by Rimsky-Korsakov, his only substantial work for violin and orchestra.

This unusual coupling of concertante works by two great friends neatly symbolises the era of the last decades of the nineteenth century in Russia. With their great conservatories, the cities of Moscow and St Petersburg dominated Russian music, but they were divided in influence. Rimsky-Korsakov, the youngest of the Mighty Five, was a professor of composition in St Petersburg, while Taneyev, the protégé of Tchaikovsky, taught at the Moscow Conservatory. The two works give evidence of the two composers contrasted attitude to the past and are sure to garner interest from all Russian music enthusiasts, especially when performed, as here, by musicians of such a high pedigree. 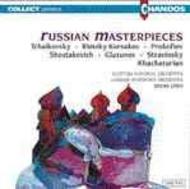 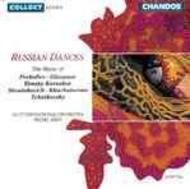 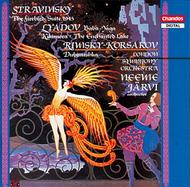 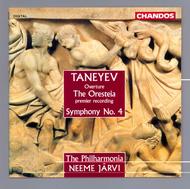 Taneyev - The Oresteia Overture, Symphony No.4 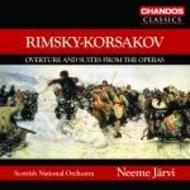 Rimsky-Korsakov - Overture and Suites from the Operas