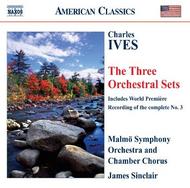 The works on this recording focus on a singular genre created by a singular composer. The kind of piece Charles Ives called a set is usually a larger work made by putting together independently-written smaller pieces.

The First Orchestral Set, variously titled 'Three Places in New England' and 'A New England Symphony', is one of Ivess great tributes to his roots. Put together around 1913-14 from material going back years, it is typically Ivesian in that each movement has an underlying program.

Like the other sets, the Second has a slow-fast-slow pattern and a visionary hymn-based finale. The unfinished Third Orchestral Set was the only set Ives planned as a whole from the beginning. It may stand as the most profound discovery of the many and ongoing efforts to reconstruct Ivess incomplete works. This is its first complete performance and recording.

Ives created his Sets by assembling a trio of independent short pieces to make a composite work. The Three Places in New England (of 191314) is a prime example, and many consider it among his very greatest music, with its extraordinary pictorialism enhanced by popular musical quotations, followed by an ecstatic climax in the finale. ... The result, played with marvellous intensity and dedication by the Malmö Symphony Orchestra under James Sinclair (and superbly engineered by Mike Hatch), is unforgettable.
Penguin Guide 2010