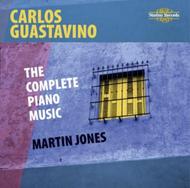 Carlos Guastavino was born in Santa Fe Province, Argentina. He studied music in Santa Fe with Esperanza Lothringer and Dominga Iaffei, and in Buenos Aires with Athos Palma. A talented pianist, he performed his piano works in London in 1947, 1948, and 1949, invited by the BBC and as a recipient of a scholarship from the British Council.

One of the foremost Argentine composers of the 20th century, his production amounted to over 200 works, most of them songs for piano and voice. His style was quite conservative, always tonal and lusciously romantic. His compositions were clearly influenced by Argentine folk music.

Martin Jones has been one of Britain's most highly regarded solo pianists since first coming to international attention in 1968 when he received the Dame Myra Hess Award. He is a prolific recording artist and his many discs for Nimbus Records include the complete solo piano works of Mendelssohn, Brahms, Debussy, Grainger, Szymanowski (voted Best Instrumental Recording of 1996 by the Spanish magazine CD Compact) and the sonatas of Alun Hoddinott. The soundtrack of the film Howard's End features Martin Jones performing Grainger's Bridal Lullaby and Mock Morris.