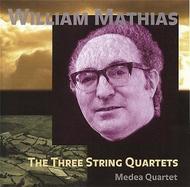 William Mathias was by training and inclination a pianist. He started composing short pieces for the instrument at five years of age. He developed a formidable technique and gave the first performance of his 3rd Piano Concerto in 1968 with the BBC Symphony Orchestra. This was subsequently recorded by his teacher at the RAM, Peter Katin. In the 1960s he was considered to be one of the brightest hopes of his generation.
The first quartet, a single movement work, was written in 1967, is dedicated to Alun Hoddinott and was first recorded by the Chilingirian Quartet. The second quartet was written in 1980/1 and was a BBC commission for the Gabrielli Quartet. The third and final Quartet was commissioned by the Harrogate Festival and was premiered by the Medici Quartet in 1986.
The Medea Quartet were formed in 1991 at the Royal Academy. In 1993 they became the Quartet in Residence at York University following in the wake of the Amadeus, Medici and Fitzwilliam Quartets. They recorded these three quartets in 1993.
This CD is available again for the first time in a number of years. The original review from Gramophone (10/95) declared That the three quartets in sequence make such an involving experience is in fair measure due to the quality of the playing of the young Medea quarteta very accomplished group, both brilliant technically and deeply expressive. With David Lefeber as producer and engineer, the Metier sound is first rate too, with superb presence and atmosphere.