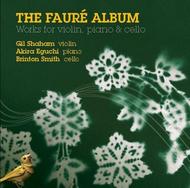 Shaham views Fauré as the unsung hero of French music, a modest master whose works  particularly the chamber music  and personality are still greatly misunderstood and underappreciated despite the popularity of works like the Requiem. Shaham says: Ive loved Faurés music since the first time I heard it. Its an unmistakable voice: elegant and tender, conveying the subtlest emotion, and yet very passionate and at times intense."

On the Sonata Op.13, Shaham explains: I remember hearing the piece for the first time: Itzhak Perlman and Samuel Sanders performed it and I fell in love with it. It has everything that a great piece should have and tells an incredible story in 30 minutes. Fauré manages in a piece for violin and piano to create a world of unimaginable richness.

As a complement to the Sonata, Shaham, Eguchi and Smith perform the autumnal Trio Op.120, Faurés final work for his own instrument, the piano, with works drawn from Faurés justly celebrated songs including Au bord de leau and the album concludes with Akira Eguchis special arrangement for trio of Après un rêve, one of the most popular art songs in the literature.

 leaps straight to the top of the pile  a disc to savour. BBC Music Magazine, Dec 2003

Arguably the best and most distinctive of Fauré  Shaham plays them all with his characteristic sweetness of tone and emotional sincerity. Daily Telegraph, Oct 2003

Shaham plays with a phenomenal range of tone and dynamic. In the two major works, too, his free expressiveness brings a winning sense of spontaneity, well matched by the pianist, Akira Eguchi. (4 stars) The Guardian, Jan 2004

Definitely a CD to treasure The Times, March 2004

Sure and sympathetic playing ... and his perfumed tone quality evokes past masters New York Times, Dec 2003