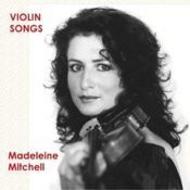 Madeleine Mitchell is an internationally acclaimed violinist  a former leader of the renowned Bridge Quartet. She is the mastermind behind Red Violin  a festival celebrating the violin running in Cardiff 1-9 October 2007 (first organised in 1997 under the patronage of Lord Menuhin). Madeleine has performed with many of the major orchestras throughout the world. She is known for her recitals and wide repertoire, frequently featuring on television and Radio 3.
The featured soprano is Elizabeth Watts  winner of the Rosenblatt Song Prize at the BBC Cardiff Singer of the World, having previously won the Kathleen Ferrier Award in 2006.
Pianist Andrew Ball is Madeleines regular duo partner. He is regarded as one of the foremost pianists of his generation and his busy career has taken him all over the world.
This CD is a collection of Madeleine Mitchells personal favourites, a journey of expressive pieces, most of which she performs on a regular basis in her many concerts. The notes fully explain what it is about each piece that she finds so interesting and the reasons for selection.
Featured on this disc is a world première recording of Morceau Caracteristique by Frank Bridge  the score was thought to have been lost, but has recently been relocated. It has not been performed for over 100 years  until now.