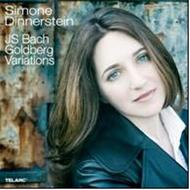 This recording contains some of the most beautiful, sensitive, intelligent and manifestly sincere playing youre ever likely to hear.  Piano magazine review

Brooklyn-born pianist Simone Dinnerstein decided to learn Bachs Goldberg Variations as a project during her maternity. It led to her career taking off in a way she could never have expected. She performed the complete Goldberg Variations at her self-produced and critically acclaimed New York debut at Carnegie Hall in November 2005 which led to the release of this recording - her Telarc debut which she had recorded in March 2005 with GRAMMY Award winning producer Adam Abeshouse. As a result of the performance she gained an international manager, signed an exclusive record contract with Telarc, and is now touring internationally.
The piano she plays, a 1903 Hamburg Steinway model D concert grand, was originally owned by the town council of Hull, England  during WW2 the town hall was severely damaged by bombing but the piano survived, and was restored in New York City in time to be used at the re-opening of the World Trade Centers Winter Garden.

This is, in many respects, an exceptional performance of the Goldberg Variations on the pianothis very distinguished performance merits close attention from all Bach lovers. - Robert Matthew-Walker, International Record Review, September 2007

Simone Dinnerstein finds a graceful tone for the gentler variations, and a wide palette of colour when that is required. - Michael Church, The Independent, 17 August 2007 (Album of the Week)

Breathe: The Relaxing Piano for Lovers