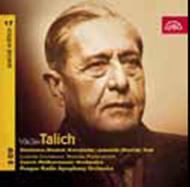 » Recitative and Aria of Anezka, (Act 2)

» II Playing at Swans and Peacocks

» Recitative and Aria of Anezka, (Act 2)

» II Playing at Swans and Peacocks

The final title in the Talich Special Edition series is a sort of chronological cross-section of Talichs recordings. It opens with the symphonic poem árka, recorded in 1929 when Talich first caught the recording bug, accepting an offer from His Masters Voice to record Smetanas complete My Country with the Czech Philharmonic.

The recording presents Talich at the peak of his powers, standing at the head of his polished and devoted Czech Philharmonic and lauded as one of the greatest directors on the European continent. Talich and the Czech Philharmonic also recorded a remarkable series of Czech compositions (including the Slavonic Dances, Prague Carnival, and Suks Serenade for String Orchestra) during the 1930s in London.

This recording of the overture to Smetanas Libue, an opera whose performance had long been forbidden by the Nazis, dates from 1940  1941.

Rare recordings from rehearsals give us a unique glimpse into Talichs creative process.

Bonus - Vaclav Talich speaking plus recordings of parts of rehearsals for Dvorak's Cello Concerto in B minor B191 op.104 and Dvorak's Symphony No.9 in E minor B178 op.95 'From the New World'.