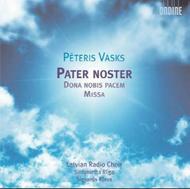 This release follows on the great success of two previous Ondine releases featuring the popular Latvian composer Peteris Vasks: the award-winning recording of the Second Symphony with the Violin Concerto 'Distant Light' and the Third Symphony coupled with the Cello Concerto.
This new disc focuses on the religious aspect in Vasks' music and contains three sacred works for choir and orchestra. Based on Latin texts from the traditional Christian liturgy, these works include The Lord's Prayer and the ordinary of the Mass.
superb performances: clear, perfectly paced, beautifully balanced, sumptuously textured, with just the right pitch of emotion. performance*****, sound**** BBC Music Magazine Choral & Song Choice, September 2007
Première recordings of Pater noster and Missa.