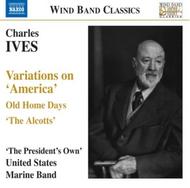 Charles Ives, like his elder contemporary John Philip Sousa, was born and raised amid military quicksteps and medleys of patriotic songs. Both became skilled professional musicians in their early teens, yet while Sousa held steadfastly to the regularity of Americas military pulse, Ives began to blaze the trail toward a uniquely
American music.
Beginning with the remarkable Variations on America, described by Ives as but a boys work, partly serious and partly in fun, all of the works heard on this disc are to a greater or lesser degree transcriptions or adaptations for the modern American concert band.
The Presidents Own United States Marine Band have won great acclaim on previous discs in the Wind Band Classics series: This is a marvellous disc in every respect, and we can only hope that it marks the beginning of a series featuring this ensemble.. to have them on hand for a more systematic survey of the band repertoire, both original and in transcription, would be a wonderful boon to collectors and fans of great band playing. Classics Today on 8.570243