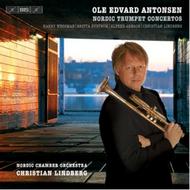 Norwegian Dance: with thanks to Rikard Nordraak

Norwegian Dance: with thanks to Rikard Nordraak

Trumpet player Ole Edvard Antonsen and trombonist Christian Lindberg have collaborated extensively before on disc, notably in Lindbergs own double concerto, Behac Munroh (BIS-CD-1428). On the present release this collaboration has taken a new turn, with Antonsen appearing in a programme of Nordic trumpet concertos from between 1987 and 2005, supported by Lindberg conducting the Nordic Chamber Orchestra, whose principal conductor he has been since 2005.
Lindberg is also responsible for one of the works featured on the disc, the concerto Akbank Bunka, which at its world première in 2005 in Scotland, was described by a reviewer as flitting between lilting modal lyricism, astringent dissonance, and even unadulterated jazz with the flirtatious unpredictability of a butterfly. Its three succinct movements focus wholly on the very special qualities of Antonsen's mind-boggling technique and golden lyrical tone.
The other compositions on this disc span the Nordic countries, with works by fellow Swedish composer Britta Byström (b.1977), Finnish Harri Wessman (b. 1949) who describes his own harmonic method as a kind of contrapuntally treated jazz harmony, and Norwegian composer Alfred Janson (b.1937) whose music integrates influences such as late romanticism, jazz and Norwegian folk music. Jansons Norwegian Dance is an attempt to reclaim dance music  which he considers to be the origin of all music  from the commercial forces with a return to folk music.
All in all, a very varied programme then  expertly performed by one of todays leading trumpet players, the highly versatile Ole Edvard Antonsen.