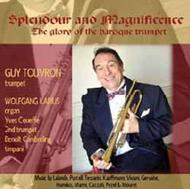 Splendour and Magnificence - The Glory of the Baroque Trumpet

Suite for Trumpet Timpani and Organ

Sonata for trumpet in D major

Trumpet Sonata no.1 in C major

Suite for Trumpet Timpani and Organ

Sonata for trumpet in D major

Trumpet Sonata no.1 in C major

The names of the composers represented here (apart from Purcell) rarely appear on modern concert platforms and otherwise, only the music of Lalande is widely known. However, all of them were master musicians whose influence in 17th century Europe was immense, and certainly the variety and quality of their music deserves to be remembered. Their lives and notable achievements are described only briefly here, but much more information is now becoming available, especially on the Internet.
In compiling this disc, we have attempted to create a satisfying concert which begins with a brisk fanfare with timpani, moves to two chorale preludes and then a group of sonatas for solo trumpet with organ. The four Sonatinas for two trumpets form the centrepiece  we then move to a fourth group of solo trumpet works, another chorale prelude, and end in gay abandon with the two trumpets, organ and timpani.
For those listeners who wish to experience some of the development of the baroque instrumental style the tracks can of course be programmed accordingly, beginning with the Gervaise, followed by Marini, Cazzati, Viviani, Lalande, Pezel, Purcell, Mouret, Kauffmann and Tessarini  or indeed, to the listeners pleasure.
Guy Touvron is today an artist who has reached full maturity. From a very early age he started on a brilliant career crowned by 3500 concerts and he has received many international awards. He has played with countless prestigious orchestras and been conducted by a long list of maestros. He tours the festivals throughout the world and he regularly plays in Japan, China and throughout Europe. He renders baroque music with as much talent as chamber music and contemporary creation. More then twenty five works have been written for him by present day composers: Karol Beffa, Charles Chaynes, Graciane Finzi, Antony Girard, Jacques Loussier, Alain Margoni, François Rauber. He has recorded more than seventy five records and, as well as his career as a soloist, he is a teacher who wishes to convey his experience to young artists in many Master Classes and Academies.
He is a titular professor at the Paris Conservatoire (CNR) and has published a biography of Maurice André: Maurice André, une trompette pour la renommée. He is accompanied on these recordings by Wolfgang Karius (organ), Yves Coueffe (trumpet) and Benoît Cambreling (timpani).