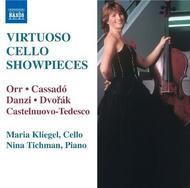 This recording of virtuoso cello repertoire ranges from the work of the Mannheim cellist and composer, Franz Danzi to the British composer Buxton Orrs Carmen Fantasy, the cellists answer to Franz Waxmans famous violin fantasy. Orrs work opens, unusually, with a cello cadenza based on the Fate motif from Bizets opera, which links the familiar themes, such as the Habanera and the Flower Song, used in this dazzling encore piece.
The Spanish theme is continued in Gaspar Cassadós Lamento de Boabdil, which describes the legendary sorrow of the exiled last Moorish ruler of Granada, Muhammad XII, known to the Spanish as Boabdil. Castelnuovo-Tesdescos Figaro Variations takes as it theme the famous Largo al factotum, which appears in various guises with increasing demands for technical virtuosity.